Live Monopoly: Our Review, How and Where to Play

Monopoly by Evolution is a live dealer casino game released in 2020. It boasts an RTP of 96.23% with a minimum bet of $0.10 and a $2,500 maximum wager. The game is available on both desktop and mobile and features unique gameplay that plays like a game show.

Though their live casino offers are diverse, innovation and originality are what truly made Evolution the giant it is today. The Monopoly live casino game is a perfect example of this in practice. In this Evolution Monopoly game review, we’ll take a deep look at one of the most celebrated new casino games in recent years. 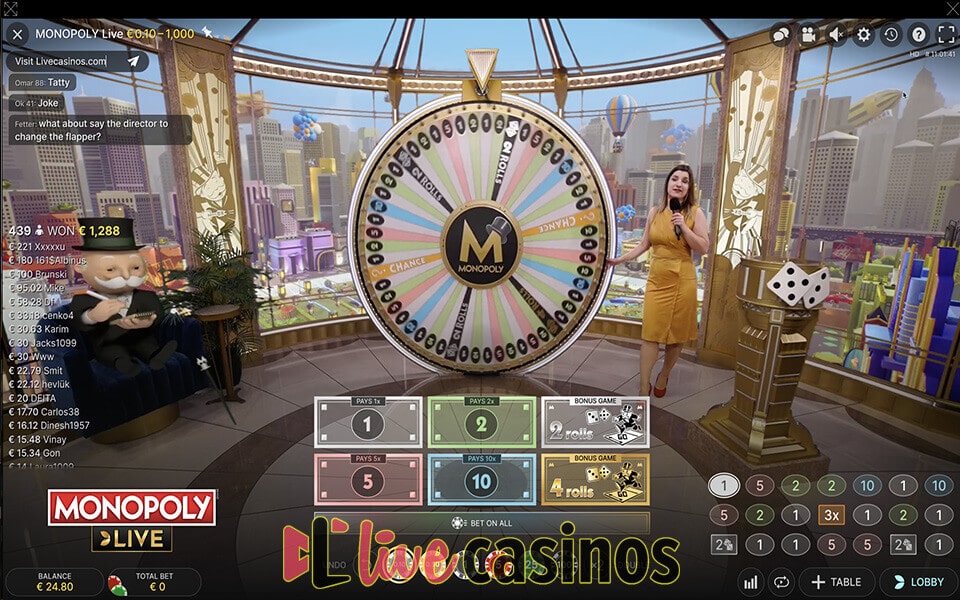 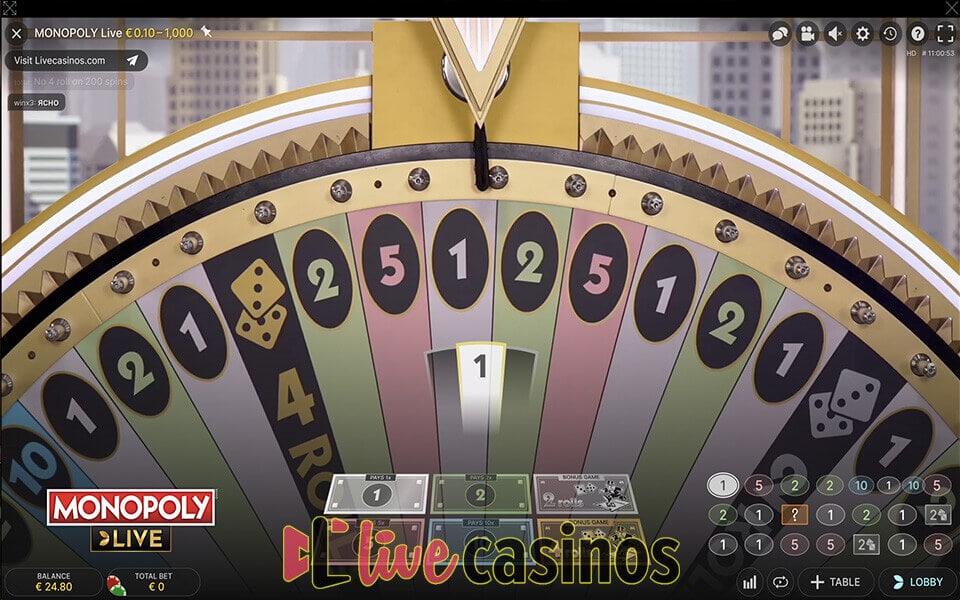 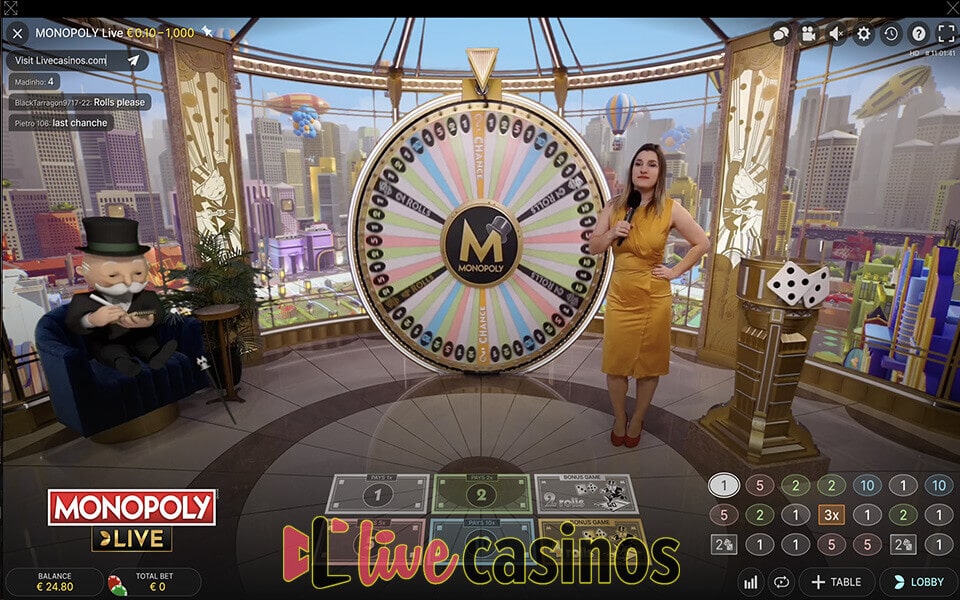 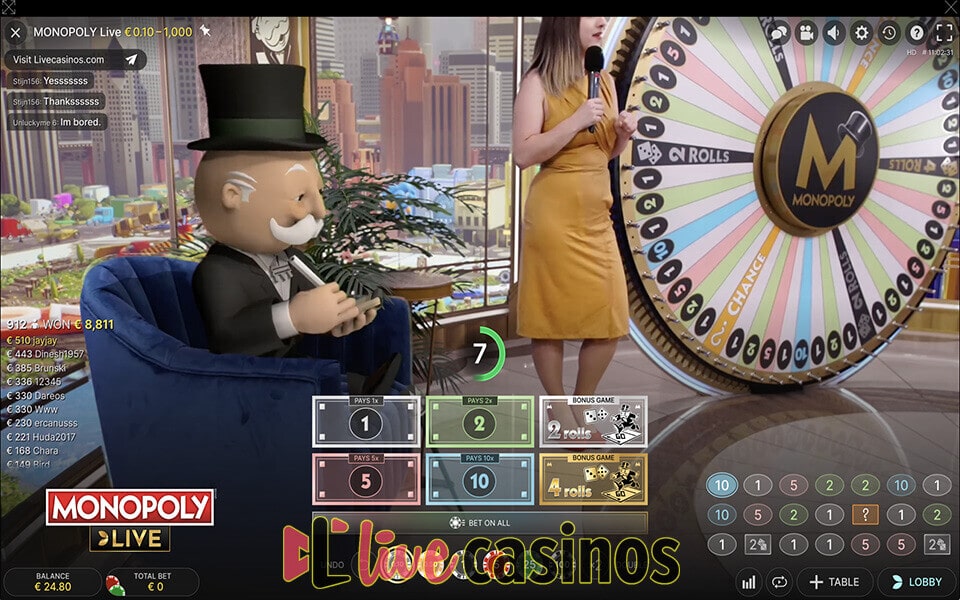 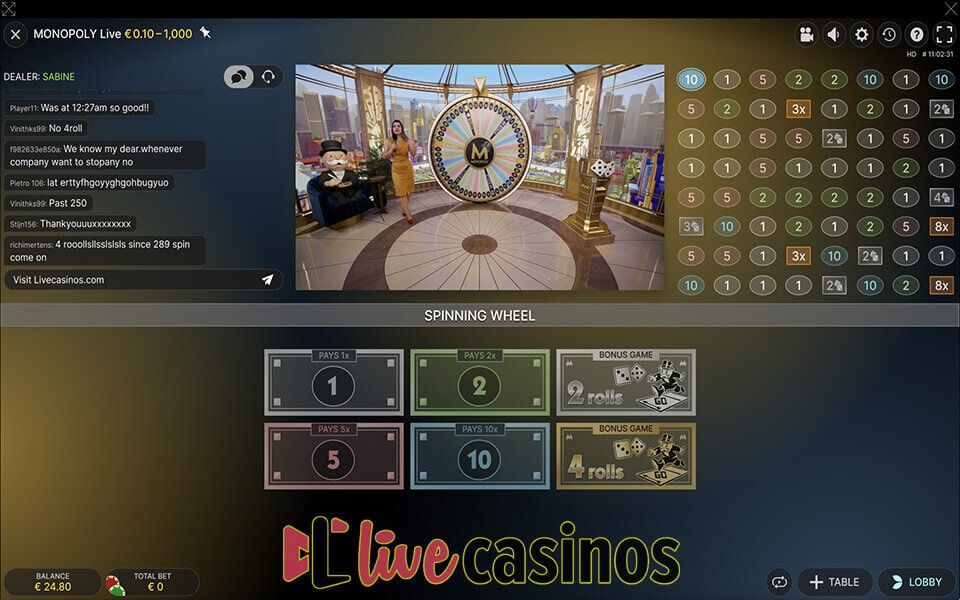 A special release exclusive to Evolution Gaming, Monopoly Live was created in cooperation with Hasbro Inc, the owners of the Monopoly brand. The game has a unique format of a live online game show based on the world’s most famous board game. Also, Monopoly Live has a lot of similarities with Evolution’s Live Dream Catcher, as it also features an enormous money wheel. In fact, it can be defined as a special edition of Dream Catcher with an augmented reality 3D bonus game. This authentic feature defines the nature and the appeal of this unique live casino game.

Monopoly Live boasts an extravagant studio that is Monopoly-branded. It even has a virtual Mr. Monopoly sitting on the side, reading the newspaper, sipping tea or simply observing what’s happening. Sometimes, though, he will spring into action and go on one of his celebrated adventures.

Monopoly by Evolution also relies on a live host who spins the money wheel, animates the players, and interacts with them directly through live chat. It’s a game focused on entertainment value rather than a hard online gambling experience.

The Monopoly board is available in British English, German and Italian

No special skills required – easy to understand and beginner-friendly

How to Play Live Monopoly

Much like in Live Dream Catcher, the gameplay revolves around the huge money wheel with 54 segments. The rules and proceedings are simple enough. Before the host/hostess spins the wheel, the players are invited to place bets on their desired segments (one or more). All they have to do then is watch the wheel go round and round and pay attention to the moment when it comes to rest. If the wheel lands on a segment you wagered on – you win. Regular bets include wagers on simple numbers 1, 2, 5, and 10 (no 20 or 40 segments like in Dream Catcher). These segments deliver multipliers of 1x, 2x, 5x, and 10x bet amount.

The wheel also contains special segments, namely Chance, 2 Rolls and 4 Rolls. If the pointer indicates the Chance segment, and there are players who have placed their bets on it, they will receive a card with a cash prize or a multiplier bonus. Chance is one of the most exciting Live Monopoly features. We’ll dive further into the details in the Special Features segment of this Evolution Monopoly game review.

Players who place their wagers on 2 Rolls and 4 Rolls segments have a chance to take part in a stunning and lucrative augmented reality 3D bonus game. For the bonus to be triggered, the wheel needs to stop on the 2 Roll/4 Roll segment. Mr. Monopoly jumps out of his chair, the dice are rolled (2 or 4 times) and he will move along a 3D board straight from the Monopoly world. There are several possible outcomes to this bonus game, which we’ll discuss further down.

Below, you’ll find an official Evolution video centered around the biggest Live Monopoly win to date – 2920x. However, the video also contains 5 solid minutes of Monopoly Live gameplay. It serves as a nice introduction to how Monopoly Live works – especially the incredible bonus games.

You’ll also get a peek at the incredible 3D-rendered world Evolution crafted for us! It takes you right into the world of the beloved board game in a way we’ve never seen before. It also perfectly showcases the incredible multipliers that can stack on top of each other.

Below, you’ll find a Monopoly Live paytable with returns for all the main bets. However, the issue is that the paytable covers only a part of the possible outcomes. Remember, the Chance and Rolls wagers can be far more profitable. However, each leads to a bonus game that can reward not only cash, but other perks such as a multiplier on the next round. These are much harder to quanity in a simple RTP calculation.

As previously mentioned, there is also one Chance segment, two 2 Rolls segments, and one 4 Rolls segment. Each of these is a separate bet with no straight payouts. The overall Monopoly Live RTP is published as 96.23%. This likely only takes into account the main 4 bets, however, and not the bonus games.

Remember that LiveCasinos.com isn’t here just for live casino game reviews. We also handle guides and strategies, helping you get the best start possible. Monopoly is a bit of a special case, though, but it can easily be compared to Dream Catcher. As such, you can find a basic Evolution Monopoly strategy here.

Make sure to choose the game that suits your taste and budget. Game show live casino games play very differently, however, and we’ve made a brief overview of the best ones. This includes a comparative list of top money wheel games, which notes the differences between them.

The UI has all the helpful bits that you’d expect from a flagship Evolution title. Firstly, there’s a settings menu that allows you to switch viewing mods, set the stream quality, and adjust audio levels. This is where you’ll also find the language options. The Info menu allows you to find details of how to play Monopoly Live by Evolution. Of course, there’s also the live chat feature that is used to communicate to the host and other players.

Let’s take a closer look at the special Live Monopoly bets. The first, and simpler one is Chance. Now, you don’t need to place a special bet to take advantage of Chance. All players who placed bets in that round get the bonuses. These can be either a cash prize based on your stake or a multiplier. The former is rather straightforward – you win a payout out of three possibilities. The multiplier, however, gives you a ‘card.’ This card gives you a 4x, 8x, or 12x multiplier on your next spin. However, you don’t need to bet again. All previous bets remain in place, and if you win anything in this second spin, your returns are multiplied.

Now, how Rolls works in Monopoly Live is far more complicated – it’s a sort of game within a game. First of all, these two bets work like regular wagers. You’ll need to place a 2 Rolls or 4 Rolls bet, and only the corresponding segment enters you into the bonus game. The Monopoly Man will jump onto a virtual Monopoly board and go around it collecting cash prizes and bonus multipliers. This works much like in the board game, interestingly enough. Essentially, two dice are rolled before each move. If the Bonus game starts with a 2 Rolls wager, the dice are rolled twice. If it’s the 4 Rolls segment, the dice are rolled 4 times.

There are all sorts of fields, just like in Monopoly – Properties, utilities, free parking, railways, taxes, Jail/Go, and Chance and Community Chest.

Properties, Utilities, and Railways offer basic prizes by multiplying your stake. These multipliers can be further increased when houses and hotels are randomly built on the board. If dice roll a double, you’ll also get an additional roll unless you’re in jail. Much like in Monopoly, going to Jail means you can’t move or win more until you get a double.

Chance and Community Chest can secure cash prizes or deductions. If you pass Go, all the multipliers on the board are doubled. Once you’re out of rolls, your total winnings are paid out and you return to the regular game.

Our Verdict of Live Monopoly

Evolution Gaming Monopoly Live looks gorgeous, and it is sort of a spectacle above else.

The game itself is rather basic and it runs like any other money wheel gambling game.

However, the accent here is on the Monopoly charm, and the developers tried to incorporate as many Monopoly-based elements and features as possible. The return rates may not be as high on some bets as we’d like, but Monopoly Live makes it up with its ‘wow’ factor.

If you’re looking to win live casino games through strategy, this isn’t the title for you.

However, if you want hours of fun and a little profit on the side?

How does Monopoly Live work?

At its heart, Monopoly Live is a simple live casino money wheel game. However, the Bonus game features in the spirit of Monopoly change up the formula a lot. Players put down wagers on different segments of the wheel, and a single spin determines the outcome.

What sites have Monopoly Live?

Monopoly Live can be found in all online live casinos with Evolution games. Luckily, that includes some of the best live casino sites around. Our suggestion is to try Mr Green. Besides that, you can play Monopoly Live on any site found on our Evolution page.

Can I Play Monopoly Live on mobile?

Absolutely! All Evolution live dealer casino games are fully optimized for use on smaller screens such as mobile devices. You can switch between portrait and landscape, and the game is playable on Android, iOS, and Windows phones.

How to win Monopoly Live game?

Monopoly Live is mostly a luck-based money wheel game, which means you can’t directly affect the results. As such, there can’t be a consistent Monopoly strategy to win. However, to take full advantage of the perks of Live Monopoly, we suggest betting on 2 Rolls and 4 Rolls every round. These are the key to winning Live Monopoly for large amounts.

What is the RTP in Monopoly Live by Evolution?

Officially, the RTP of this game is declared as 96.23%. However, this only applies to the base number bets. The Bonus Game has too many moving parts for a consistent RTP rate.

No. Once the wheel starts spinning, no one can affect the final outcome. Although the winnings in this game can be somewhat inconsistent, your chances of winning are exactly as advertised. Besides, Evolution is a highly-respected company and their products are vetted by several international remote gamble authorities.