Live Casino Hold'em (Ezugi): Our Review, How and Where to Play

Live Casino Holdem by Ezugi is a live dealer poker game released in 2017. It boasts an RTP of 97.84% with a minimum bet of $0.5 and a $20,000 maximum wager. Available on desktop and mobile, this game was made for those who want to play Texas Hold’em in live casinos.

Ezugi games are amazing in their simplicity, and it’s no different with their live dealer casino hold ‘em game. Straightforward and not bogged down by unnecessary extras, this title is a great introduction to casino holdem. Check out our Ezugi Live Casino Hold’em review to find out more. 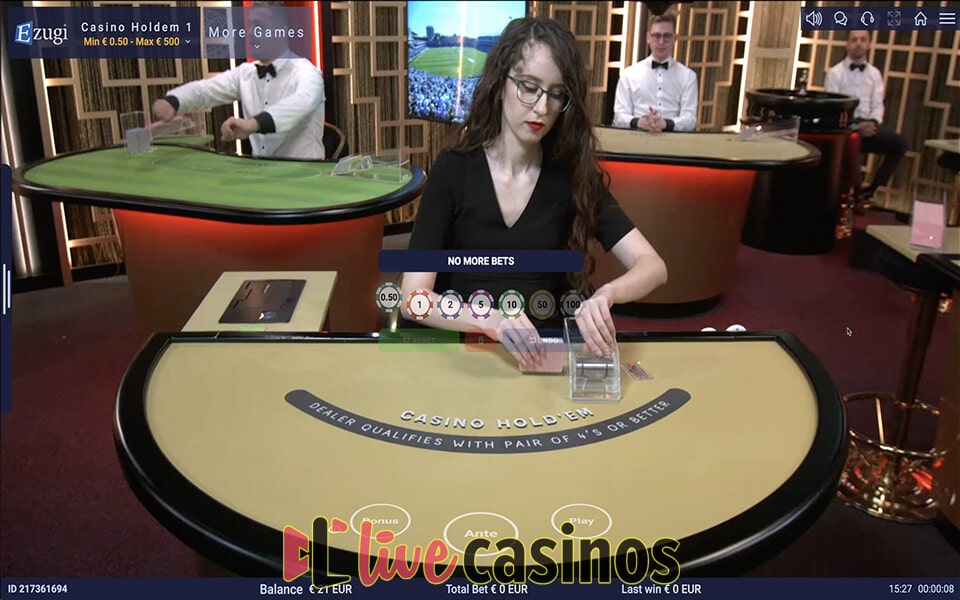 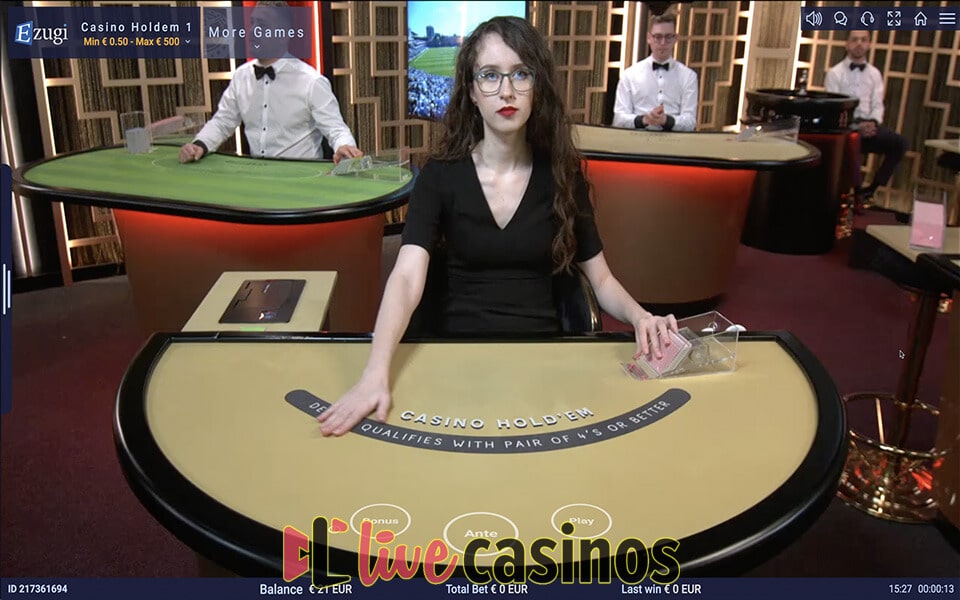 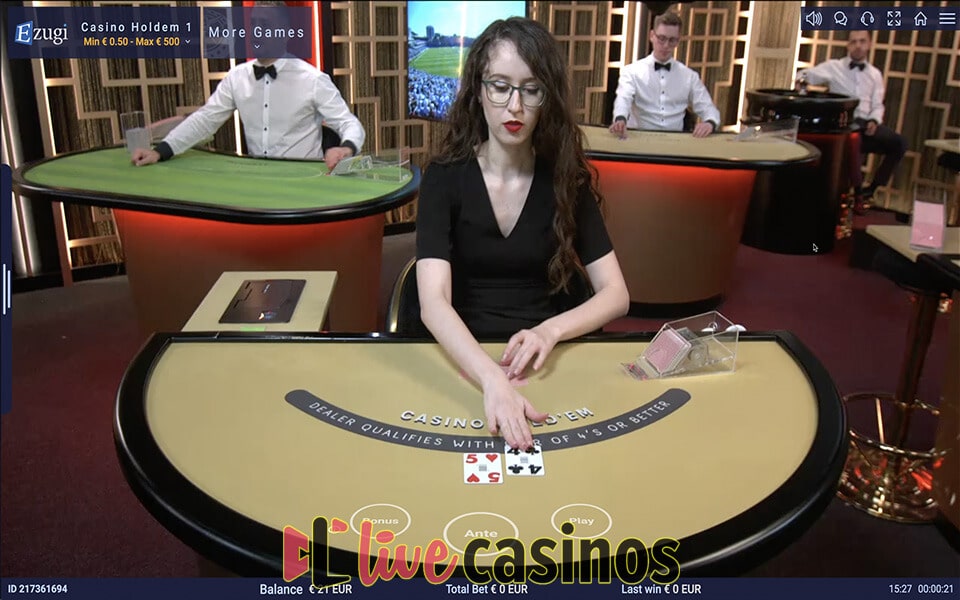 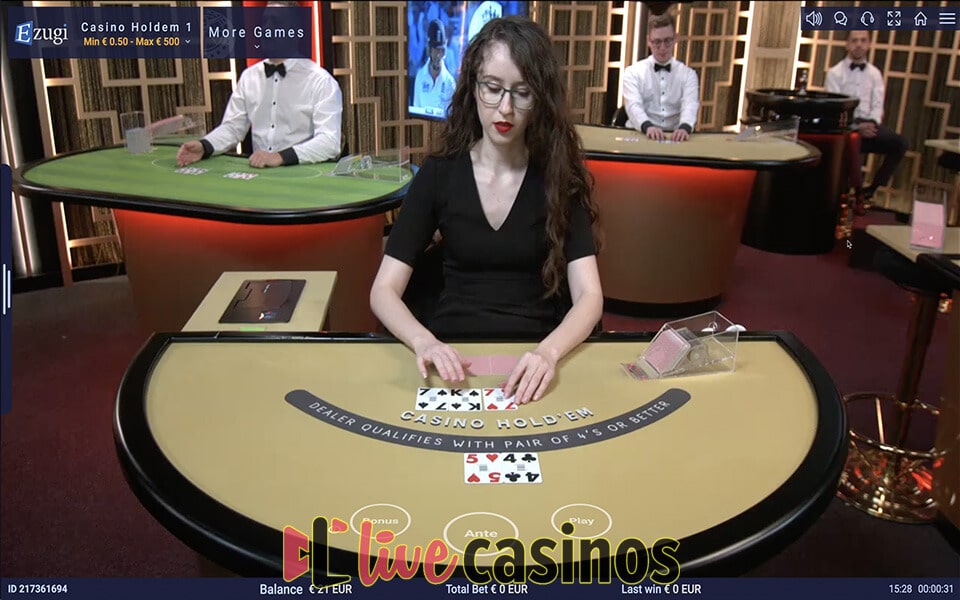 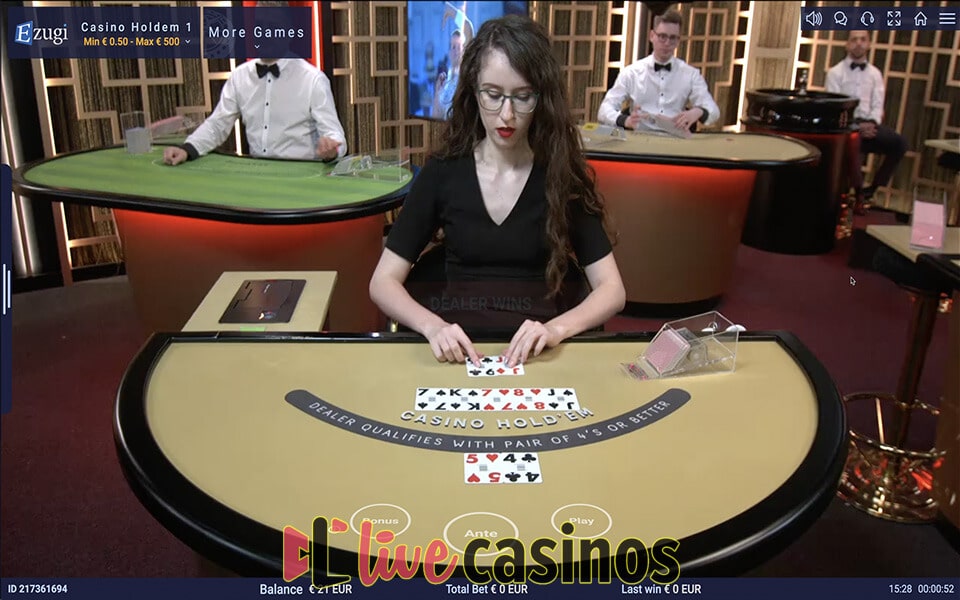 Casino Hold’em was first introduced to the gambling scene in 2000. Now, almost two decades later, the variant is an indispensable part of any table and live dealer casino category. As a Texas Hold’em derivation, Casino Poker has the same backbone rules and hand ranking as its predecessor, offering a 100:1 payout rate for a Royal Flush hand.

As expected with Ezugi software, Casino Hold’em can be accessed from a desktop, smartphone or tablet, around the clock. There are no limited seating arrangements – an indefinite number of players can join the table at any time and start wagering.

All in all, those who want to play poker in a casino online have no better options. Some rules were adopted, of course, so you can leave your bluffing skills at the door. That said, the recognizable Ezugi live dealer studio offers a true casino experience, filled with excitement and winnings.

24/7 stream with an unlimited number of players capacity

Optional bonus bet with a much higher payout rate

Live Chat available throughout the session without interrupting the game flow

History tab with the information about your daily, weekly, or monthly activities

How to Play Live Casino Holdem

Casino Hold’em is played against the house and the session starts when the players submit their Ante bet. While the game is in progress, the players must wait until the bets are settled before they join the game. After the initial bet, players can either fold or place the Call bet.

The easiest way to explain how casino holdem works is by walking you through a round. First, all players who want to participate need to put down an Ante bet. The dealer will then deal two cards to the players, two face-down cards to themselves, and three community cards. These first three cards are called the Flop. Obviously, the goal is to have a stronger poker hand than the dealer.

After the flop, you are given the option to make a Play bet or fold. Folding means you lose, while the Play requires you to double the Ante as a stake. The dealer then reveals two final community cards and his own, and the stronger hand wins.

Importantly, the dealer has to qualify for a Play bet with at least a pair of 4s. If they don’t, the round ends after the Flop, and players win the Ante bet but push the Play bet.

This means that there are several possible Casino Hold’em outcomes, as per the table below.

Poker hands work as usual, with High Card being the weakest hand and Royal Flush the strongest. Those are the basics of how to play Casino Hold’em by Ezugi. There is also the Bonus side bet, which we’ll discuss further down.

Want to see how Casino Hold’em works in action? Check out the video below, showcasing Ezugi’s latest 3.0 studio! It shows a typical round of the game, complete with dealer banter and the incredible UI. You’ll need to play yourself before you can make an Ezugi Casino Holdem strategy, of course, but beginners can still find the video useful.

Just remember that there are multiple view modes, including mobile portrait and landscape. Also, note that there are other live dealer casino hold’em games out there. Ezugi’s offer is excellent, but it can’t hurt to shop around before you decide on a title!

The payouts in this game can be vastly different depending on the hand you win with. This mostly applies to the Ante bet, which is your main bread-winner. The Play bet always pays 1:1, but the Ante can offer significantly higher profits. The same is true for the Bonus side bet. Here’s a Casino Hold’em payout table to illustrate.

With these casino hold’em betting odds, the RTP of the game is set at 97.84%. The side bet is notably weaker at 93.74%, but can still be used effectively by experienced players. As usual, any malfunctions or software issues void all bets – though we’ve never seen that happen.

Make sure to choose the game that suits your taste and budget. For more extensive guides on live casino hold 'em basics, read this article.

The base game is fairly complex as far as live casino games go, but there’s one more important feature to cover. The Casino Hold’em Bonus side bet is an optional wager players can put down with their Ante bet.

The concept is fairly simple – the Bonus bet uses your hand and the first three community cards to form regular poker hands. If you manage to get at least a pair of Aces with these five cards, you’ll win a nice bonus.

This bonus bet can be found in almost every other casino hold‘em live table, so learning how it works is useful.

Poker players and those with the ambition of becoming proficient in the most popular card game in the world will have little to complain about when it comes to Ezugi Casino Hold’em.

The ones who lack Poker experience and skills will be particularly pleased with how the platform is designed.

It offers a complete set of instructions and hand ranking.

It also enables the players to have full insight into previous sessions, the latest winners, and personal betting history.

It might not be the flashiest of games, but it’s still a worthwhile experience. Ezugi Live Casino Hold’em gets a warm recommendation from us, no matter your skill level and experience.

What is Live Casino Hold’em by Ezugi?

Live Casino Hold’em is a live dealer casino game by the software provider Ezugi. It’s a special variant of Texas Hold’em poker made for those who want to play Texas Hold’em in an online casino.

What is the best strategy for Live Casino Hold’em by Ezugi?

For beginners, the best strategy is to stick to the Ante and Play bets. You also need to be able to judge when to Call and when to Fold. A simple trick is to fold if you don’t have at least a pair of 5s or higher. The dealer needs a pair of 4s to qualify for a Play bet, so this allows you to be safe without knowing the last two community cards.

What is the difference between Casino Hold’em and Texas Hold’em?

Classic Texas Hold’em is played by multiple players. It involves bluffing, raising, and overall trying to have a better hand than other players – or getting them all to fold. Casino Hold’em by Ezugi, on the other hand, pits players against the casino. There is no raising or bluffing – merely a straight race to see who gets the better hand.

Can I play Casino Hold’em from Ezugi for free?

Currently, customers can only play Ezugi Casino Holdem for real money. If you want to know more about the game beforehand, check out the review above, complete with a video preview.

What is the RTP in Casino Hold’em by Ezugi?

Thanks to industry standard payouts and well-designed rules, the game offers an RTP of 97.84% for the Ante bet. The Bonus bet has a wider house edge with 93.74%.

Can I play Casino Holdem by Ezugi in the US?

Ezugi as a casino software provider does not have any remote gambling licenses in any US legal jurisdictions. As such, their games are not currently available to American casino fans.