Live Football Studio US: Our Review, How and Where to Play

Football Studio US is a live casino game that combines simple card-based gameplay with a football-focused sportscast. Released by Evolution in 2022, it boasts an RTP of 96.27% with a minimum bet of $1 and a $5,000 maximum wager. The game is available on both desktop and mobile and focuses on American football instead fans.

Evolution Live Football Studio is a remarkably successful game despite its simplistic gameplay. This new release provides live updates from the NFL and College Football, as presented by Evolution’s professional dealers as you play. It’s an interesting option for any fans of football who enjoy Dragon Tiger as well. 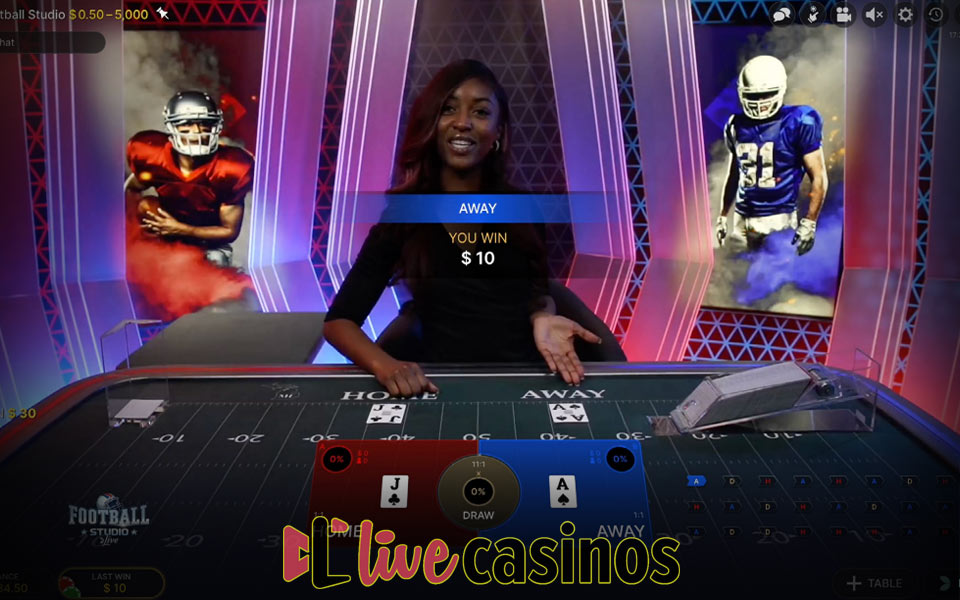 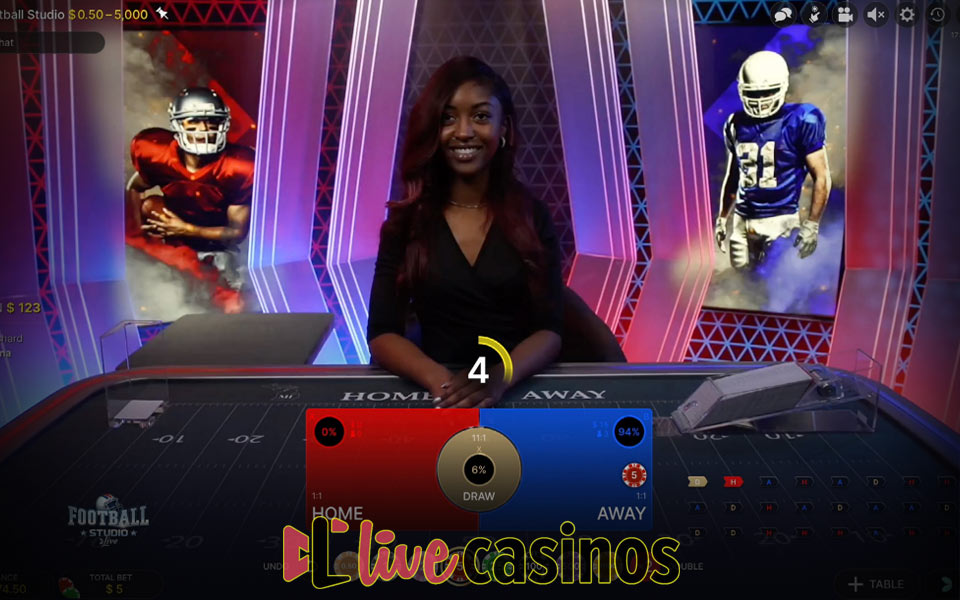 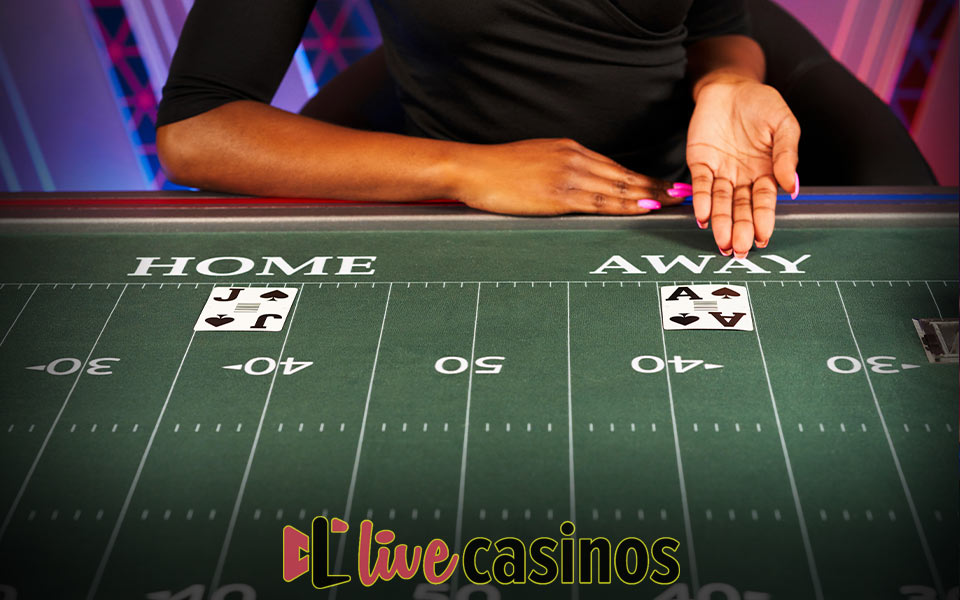 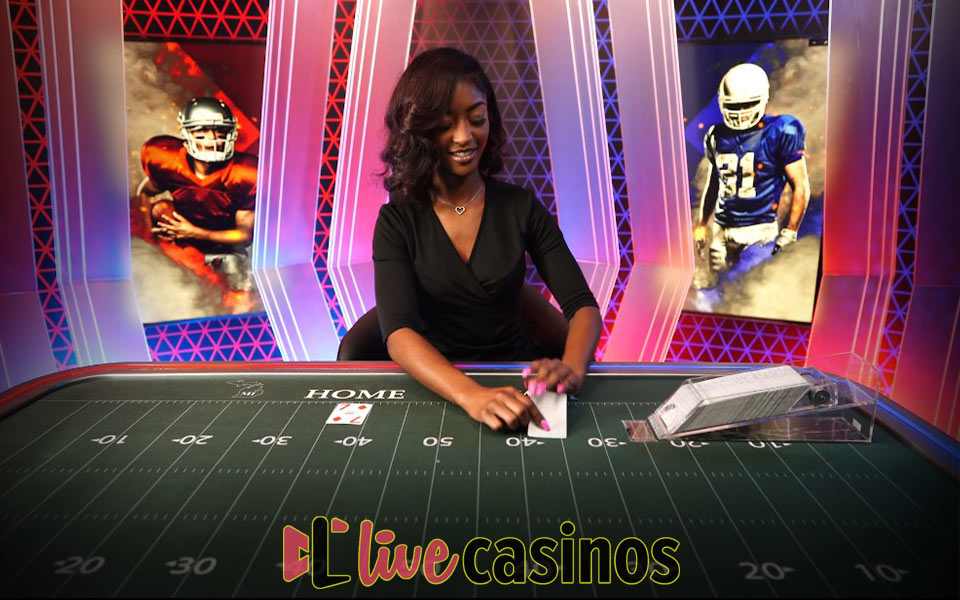 The runaway success of Evolution’s Live Football Studio inspired them to work on more games aimed at sports fans. They recently released Football Studio Dice, for instance, and now the attention turns towards the growing US market.

Football Studio US allows you to play a simple game of Hi-Lo while enjoying live commentary on football matches, news, and son. To make ourselves clear, the stream focuses on US-based leagues such as the NFL, as opposed to soccer from the original Football Studio.

As you may have guessed, US Football Studio is all about engaging the audience. The presenters are quitter knowledgable on the topics they’re discussing, and the idea is for you to join in on the discussion using the live chat feature. As far as the game itself goes, it’s essentially a stripped-down version of live Baccarat (or rather Dragon Tiger.)

It’s quite obvious who the target audience is here. Live casinos in the US are growing rapidly as state-wide online gambling regulations are introduced, hence the need for a US-centric Football Studio.

If staying up with your favorite sport while slinging some cards sounds like fun to you, scroll down for a full review of Football Studio US from Evolution.

How to Play Live Football Studio US

The rules of this game were designed to be as simple as possible. After all, they’re supposed to add to the experience of watching football, not detract from it.

To play Live Football Studio, simply open up an available table, which will be available in Evolution casinos legal in the US. There is no limit to the number of players that can join at a time.

The betting table is divided into two sides that reflect a typical football match – Home and Away. The dealer will give one card to each of these two sides. The side that has the higher-value card once both are flipped wins.

The goal of Football Studio US is to predict which card will be higher. Just use the chips at the bottom of the screen to select your stake and place them on the bet you want to make.

Both Home and Away have a roughly 50% shot at winning, and both pay even money. As such, it doesn’t really matter which side you pick.

The third option is to predict a Draw, which happens if both cards are of the same value. Draw bets pay 11:1 if they win.

As noted above, the payout system in Evolution Football Studio US is as simple as the game itself. Home and Away win even money, Draw bets essentially win 10 times the stake.

You can find the full Live Football Studio US paytable below for easy reference.

Evolution Football Studio US has an RTP rate of 96.27%, or a house edge of 96.27%.  Of course, this only applies to the Home and Away bets. Draw bets instead have an RTP of 89.64%, which is why we never recommend playing them.

Remember that LiveCasinos.com isn’t here just for live casino game reviews. We also handle guides and strategies, helping you get the best start possible. Football Studio is a speciality casino game, which means there are no common strategies you can easily use. However, it is also completely based on luck, and we highly recommend proper casino money management.

Make sure to choose the game that suits your taste and budget. For more extensive guides on live casino games, check out this page.

Obviously, the most distinguishing feature of the North American Football Studio Live is the live results feed in the bottom right corner. It will display current scores of major NFL matches when available. Otherwise, the box shows current news and events pertinent to football fans.

Beyond that, players also have access to the full suite of Evolution’s quality-of-life features. These include video/audio settings, language options, and a live chat function. The chat takes center stage as players often discuss the results/news displayed.

The bottom right corner shows the results of the previous 50 rounds. These provide insight into the match history, but otherwise should not have any bearing on your decisions. The most important strategy tip for Live Football Studio is not to fall for the gambler’s fallacy.

Like the original soccer variant, the Live Football Studio US casino game is tough to rate as a casino game alone. After all, it’s not intended strictly as a casino game, and the football aspect of it cannot be overlooked.

The game itself is as good as standard Evolution Dragon Tiger. If you’re here just for the card game, though, you might prefer the actual Dragon Tiger. It comes with side betting options and a clearer focus on the game itself. However, if you’re a football fan looking for a table to unwind and talk about your favorite sport, Football Studio Live is the place to do so.

In short, this game is an excellent choice if you consider yourself the target audience. Everyone else will find the experience a bit overwhelming and barebones. Still – it’s hard not to recommend it to football fans, even if the card play itself leaves something to be desired.

What is Football Studio US?

Where can I play Football Studio US?

This game should be available across all US live casinos online that host Evolution games in their live casino lobby. Specifically, Evolution-powered casinos in New Jersey and Michigan.

Is Evolution Football Studio US a good game to play?

Yes, but only up to a point. It essentially plays like Dragon Tiger – a live casino game about comparing the value of two cards. However, Football Studio US does not have any side bets or extra wagering options. As such, the game won’t have much to offer to anyone who’s not interested in football.

Is Football Studio US available in Europe?

Yes, it probably can be played in non-US online casinos as well. However, not many Evolution casinos will opt to host the game due to its limited appeal to European and UK audiences.

T&C apply. The minimum deposit required to get the bonus is €10. The wagering requirement is 30x the bonus amount. Expiry 90 days. New players only. 18+.