Live Craps (Evolution): Our Review, How and Where to Play

Live Craps by Evolution is a live dealer casino game released in 2020. It boasts an RTP of 99.17% with a minimum bet of $0.50 and a $1,000 maximum wager. The game is available on both desktop and mobile and the best (and only) live dealer craps game online.

Online gambling fans have been waiting for a way to play craps online live for decades, and it’s finally here. As expected, the game became an instant hit. In this Evolution Live Craps review, we’ll take a look at how to play Craps live and all the benefits of doing so. 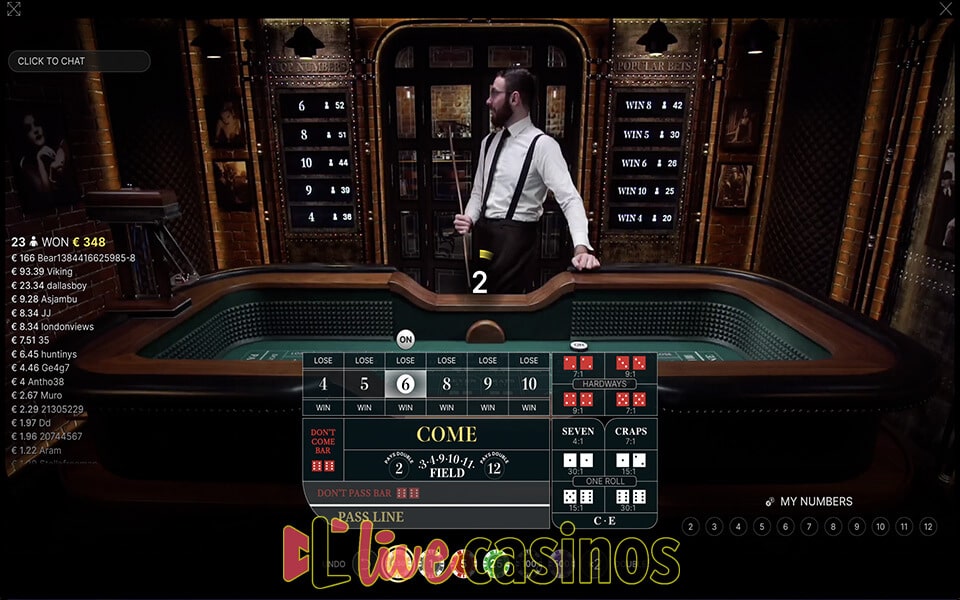 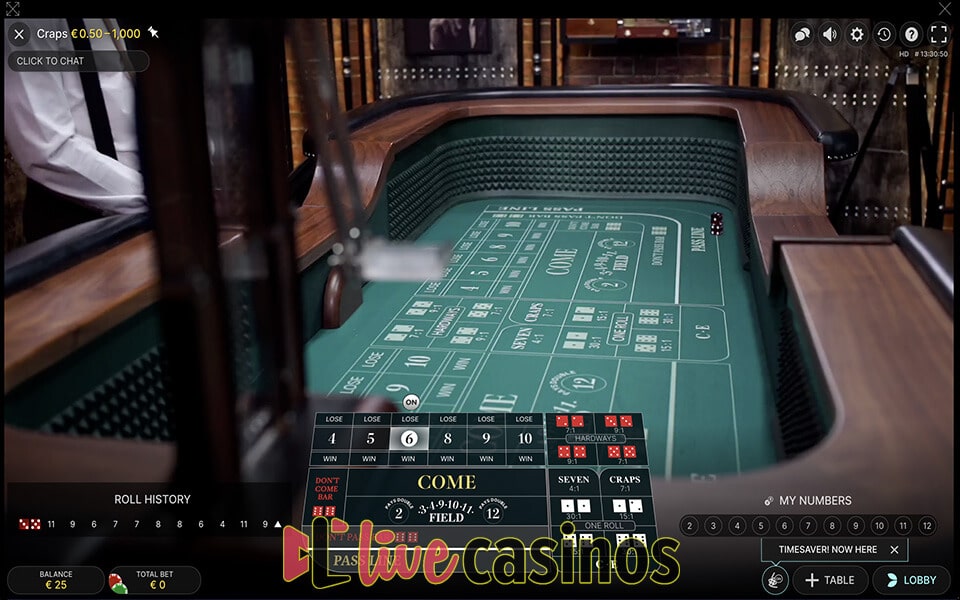 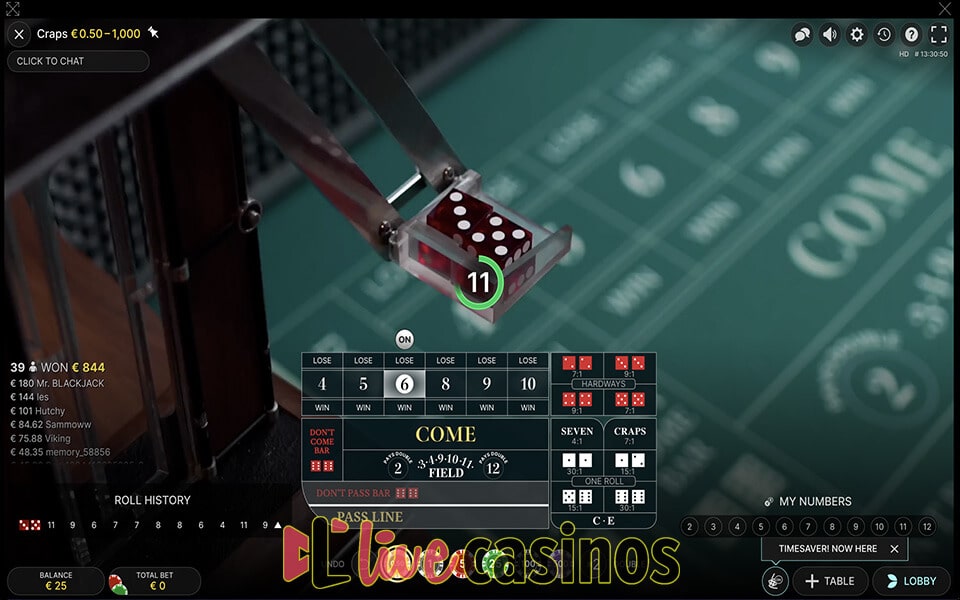 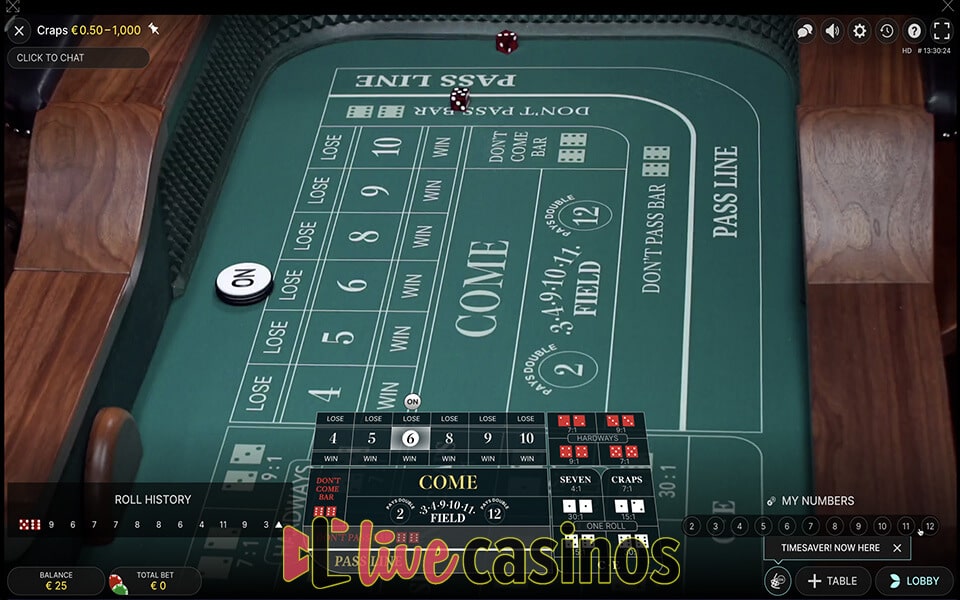 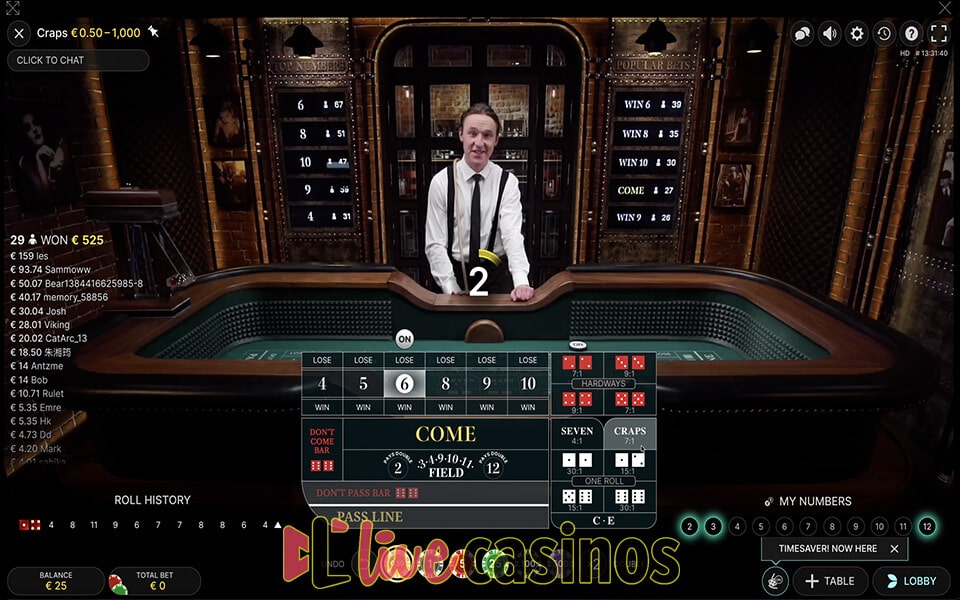 Though craps were always some of the busiest tables in casinos, the game doesn’t lend itself well to online iterations. It’s a fairly complex, relatively slow-moving game in which multiple players are paramount to the experience. That’s why most software developers avoided attempts of bringing a live online craps game to life.

Until now, that is. It makes sense that if a company is going to break new ground in this department, it would be Evolution. In addition to a host of new live table games and products, 2020 also brought Live Craps by Evolution.  If there’s one live dealer game you should pay attention to, it’s probably this one. If Craps prove themselves as a viable option for live casinos, we might witness dozens of titles in the future.

According to Evolution reps, the main goal was to preserve the greatness of the age-old casino classic. This is reflected in the studio itself – it was designed to look like a 1920s speakeasy. It doesn’t get much more “classic” than that when casinos are concerned.

The biggest issue they had to tackle, however, is nailing the community feeling of playing craps. The interactive chat feature is a given at this point, but there is also an “Applause” button. Liberal use of said button will get you one step closer to the hype of cheering a lucky streak.

Besides, players can choose where to play Live Craps by Evolution, but they all share the same table. If one player wins, the entire table wins, just like with live craps in Vegas.

Small details that aim to improve the community feeling of craps

Multi-camera coverage that keeps you in the game, delivered in full HD

How to Play Live Craps

Craps have always been a bit daunting for beginners. If you want to play Evolution Live Craps, though, you’ll have to have a firm grasp of the rules. The multiple bet types make Craps a bit difficult to explain, but we’ll start with the gist.

The object of craps is basically to get the right numbers by rolling dice. Rolling a 7 or 11 generally means the person rolling won, while 2, 3, or 12 are busts. All other options can be a win or a loss, depending on the wagers you made.

However, the fundamental bet during real money play is called the Pass Line. It predicts that the person rolling will get a 7 or 11, but loses on a 2, 3, or 12. You can also opt to bet against the person rolling. This is what we meant when we called Craps a community game. Although only one person is rolling at a time, the entire table is invested in the action.

Of course, being a live casino game, you can’t actually roll the dice. That’s why the dealer has to do it for you, which is a necessary downside.

The game has two phases – the Come Out phase and the Point roll phase. Each allows for different bets and is signified by the puck on the table. The Come Out phase is all about the Pass and Don’t Pass wagers we covered above. If any result other than 2, 3, 7, 11, or 12 is shown, the game proceeds to the Point Roll phase. In this phase, the dealer will continue rolling again and again until a 7 is shown.

Point Roll bets in Craps are not settled on the first roll. Instead, they stay on the table until they’re resolved, which is why they’re often called Multi-roll bets. Check out the list below for details.

One Roll bets in Craps are another, perhaps simpler way to play live craps online. Unlike multi-roll bets, these are always resolved in the next roll and don’t stick around. You can place these during both the Come Out and Point Roll phases, and the next roll always resolves it.

Interestingly, Evolution even included a so-called “easy mode.” This option just shrinks down the bet table to a few popular options.

Be aware that Live Craps by Evolution has a slightly different layout than craps tables in casinos. Your typical craps strategies may not work.

The Dealer Assist or Keep Winning bets are essential for consistent, repeated bets. The Craps table is pretty big, and keeping your wagers around in subsequent rounds helps a lot.

The ability to play Craps live caused quite a splash when the game launched. The successful release was accompanied by a heavy promotional campaign with plenty of promotional material. However, we feel like none of those videos showcases the game as well as the How to Play Craps Tutorial. Check out the video below.

This video gives you a detailed rundown of various bets in live craps. That way, you can know how to actually place the bets when you play Evolution Craps online. Moreover, we understand that the terminology can be complex for beginners. It can’t hurt to go over the basics of the craps game again, can it?

As you may have noticed, there are a lot of possible bets and outcomes in a game of Craps. Craps Live by Evolution doesn’t exactly follow the standard payouts for Craps, though. As such, there’s a lot of ground to cover. Below, you’ll find a Live Craps Paytable with all the various payout betting odds.

The highest RTP in Live Craps is set at 99.17%. According to the official info, though, this mainly applies to the Pass Line and Don’t Pass bets. All other Live Craps wagers are generally lower than that, with 83.33% at the lowest end of bets like Field, Craps, or Place to Win.

Remember that LiveCasinos.com isn’t here just for live casino game reviews. We also handle guides and strategies, helping you get the best start possible. You can find some great tips for playing craps here. If you feel like you already have a firm grasp on the basics, check out our page for advanced craps strategies.

Make sure to choose the game that suits your taste and budget. For another extensive guide on how live craps works, read this article.

The base game here is as complex as they come, so Evolution had no real need to implement anything extra. It would just add to the confusion – and it’s quite clear more side bets are not needed.

As such, the most useful Live Craps features are the various guides and tutorials. You can find the official Craps video guide above, but that’s not all. The help page in the upper right corner is quite comprehensive for what it is. It offers detailed instructions on how to play Evolution Craps, insight into the underlying mechanics, and even some Craps Live tips.

The My Numbers feature in the bottom right corner is also quite handy. Essentially, whenever you place a bet, the feature displays all the possible dice roll outcomes and how they affect your bet. This is especially handy for wagers like Come/Don’t Come or Lay Odds.

Below that, you’ll have two other options, accessed by clicking on the ‘Craps Menu’ button. The first, previously known as Live Craps Dealer Assist, will keep making the same bets if they’re successful. If you select ‘Learn Craps’, you’ll be taken to an interactive Craps table that explains each possible roll, bet, and outcome. This can be useful as a more visual guide to Craps Live.

Beautiful as it is, the Evolution Live Craps table is unique. That means there is only one active stream at any time, and it’s presented in English. Also, the interface, guide, and UI are far more complex than what we usually see from Evolution live dealer games. While there are localized versions in other languages, some features may be more limiting than others. For instance, the complete interactive guide is only available in major languages like Spanish or Italian.

Our Verdict of Live Craps (Evolution)

Craps tables are immensely popular among punters and gamblers, and bringing it to an online platform shows great promise.

It’s not easy to get started, but once you know how to play Live Craps by Evolution, you can reap handsome rewards in terms of both fun and profitability.

Though it’s a unique product, Evolution’s Live Craps game is far from a prototype. It bears all the stamps of quality we’ve come to expect from this industry-leading developer.

All in all, this game is a must-play for all live gaming enthusiasts in 2020. Live table Craps may be the game of the future, and it’s not one you want to miss out on.

How to play Craps online?

Currently, there are two options. The first is to find RNG craps that have been around for decades. It’s a more readily available, but less exciting option. The second is to play Live Craps by Evolution, an innovative live casino craps table available at all Evolution casinos. For more details and instructions, check out the Craps Live review above.

What is Craps Live Evolution Gaming?

Live Craps is an innovative online craps game developed by the software provider Evolution. In it, people from all over the world can play craps online via an online stream. Most of the rules are the same as in brick-and-mortar casinos, with some slight changes for the live casino format. For more information on how Craps Live works, check out the review above.

What is the best bet in Craps Live?

The best bet largely depends on the context in which it is used. However, for beginners, the best craps bets are the basic Pass/Don’t Pass and Come/Don’t Come bets. These offer the highest RTP and most consistent returns with an RTP of 99.17%.

What are the best Live Craps strategies?

The most basic Live Craps strategy is to limit losses by sticking to consistent bets like Pass Line. However, this won’t get you quick profits. As limiting as that sounds, these basic bets combine well with Take Odds for relatively safe returns in the long run. Another advantage of playing Craps online is that Don’t Pass wagers are a viable option and not frowned upon.

Every casino site that houses Evolution-made live dealer games also has Craps. If you’re looking for a quick suggestion, the 888 Live Casino is an excellent choice for most players.

What are Multi-Roll bets in Live Craps?

Craps is a relatively complicated game, and not all wagers are resolved in one dice roll. These types of wagers win or lose only on some of the possible outcomes. If it’s not immediately resolved, a Multi-roll bet stays on the table until one of the relevant results comes up.