Ultimate Andar Bahar: Our Review, How and Where to Play

Ultimate Andar Bahar is an online live casino game that supercharges the traditional Indian game of Andar Bahar. Released by Ezugi in 2022, it boasts an RTP of 94.85% with a $1.20 minimum bet and a $500 maximum wager. The game is available on both desktop and mobile and features exciting multiplier mechanics on top of classic Andar Bahar rules.

It seems Andar Bahar has been around live online casinos long enough to develop spin-off variants. Throwing in multipliers has worked for roulette, baccarat, and even blackjack – so why not Andar Bahar? Let’s take a look at how it all fits together and whether the final product is worth your time and money. 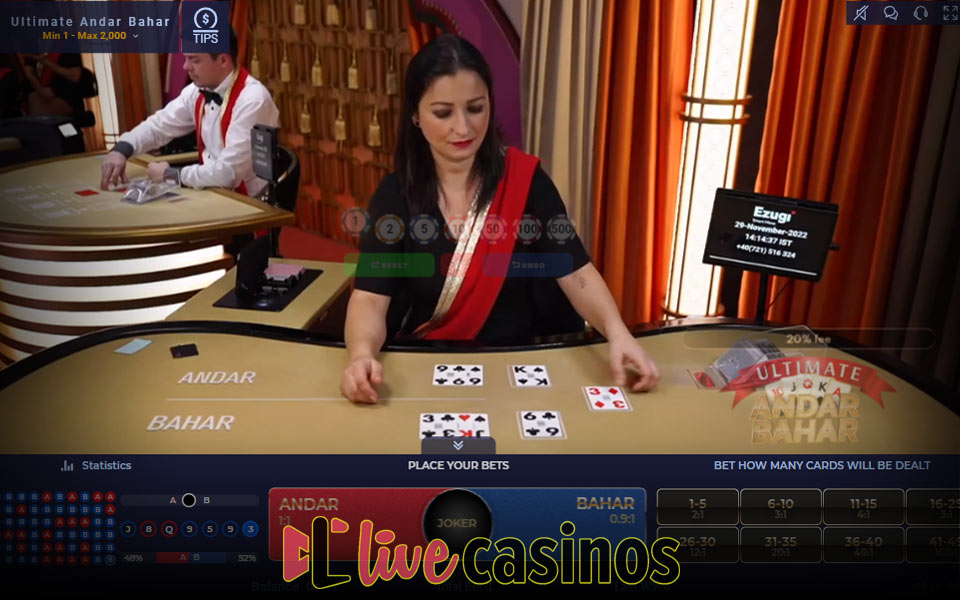 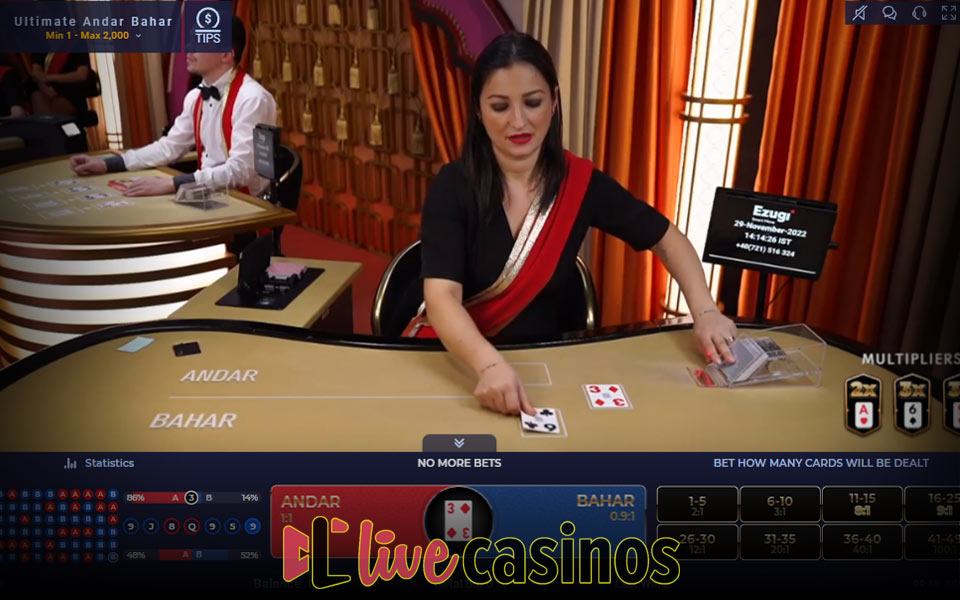 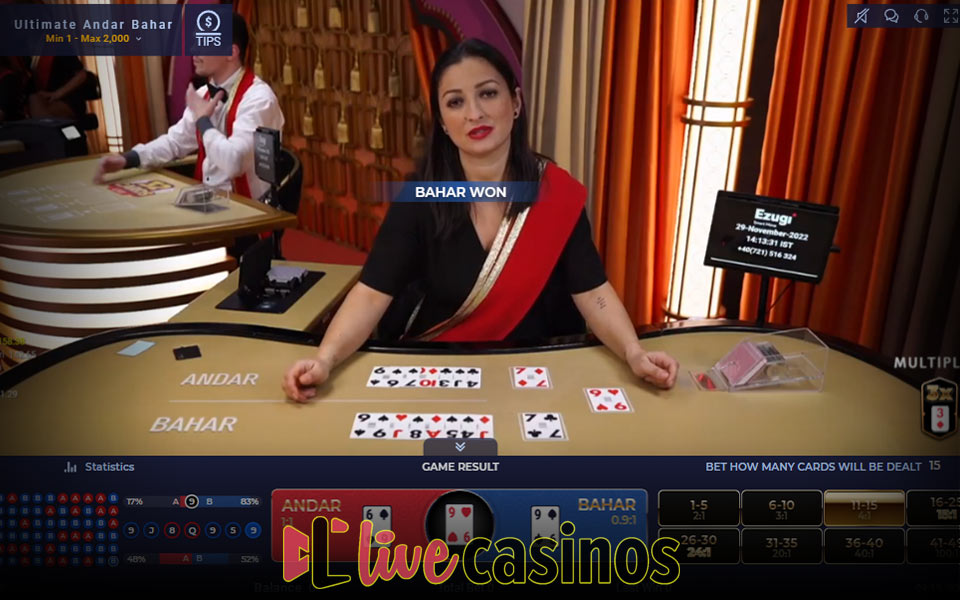 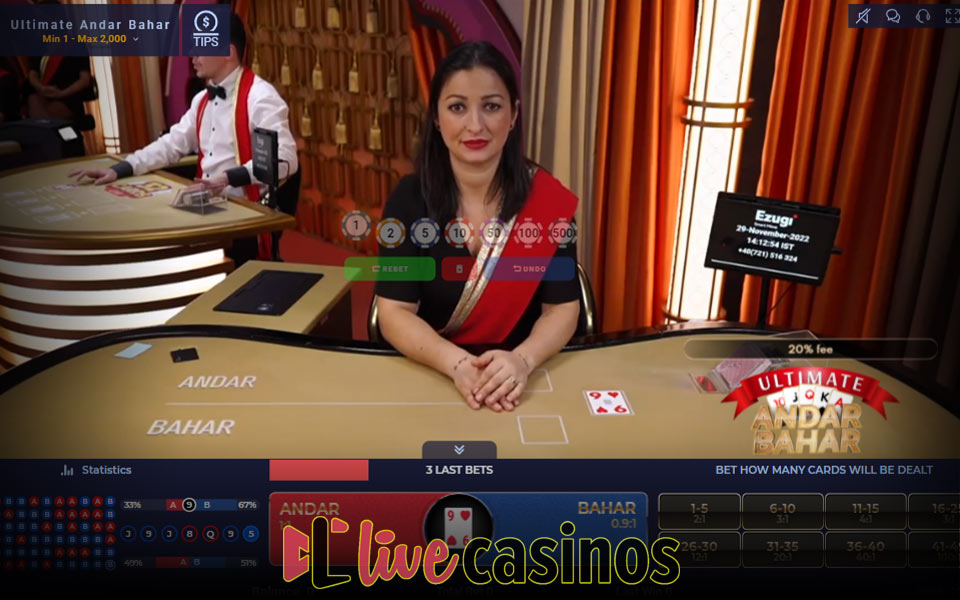 Many modern live casino games follow a certain formula: you take a popular form of casino game and freshen it up with some multipliers. It sounds simple, but it works – just look at the success of games like Lightning Roulette if you want an example. This time around, Ezugi is applying this idea to the ancient Indian game of Andar Bahar.

Ultimate Andar Bahar combines classic Andar Bahar gameplay with a system of card multipliers that allow you to potentially increase winnings. However, these multipliers come at a cost of a 20% fee on all stakes. We’ll explain how the full system works below.

For now, we’ll mention that this isn’t the first time someone introduced multipliers to live casino Andar Bahar. Evolution Super Andar Bahar did a similar thing earlier in 2022 – which makes sense considering Ezugi is owned by Evolution. However, this new Ultimate variant goes a bit further. For starters, the multipliers are used in both the main bet and the Number of Cards side bet. As it stands, that kind of feature is completely unique to the Ultimate Andar Bahar game.

Unsurprisingly, this new Ezugi release directly targets live casinos in India, where Andar Bahar is a hit. It’s also worth noting that the base gameplay does not feel much different from standard live casino Andar Bahar. As such, we recommend Ultimate Andar Bahar to players who enjoy the classic game but want to spice things up a bit by making it more volatile.

The first drawn card always goes to Bahar, which is why it pays 0.9:1

1-3 multipliers assigned to random cards before each round

Multipliers replace the even money payout with 2x, 3x, or 5x

One side bet, allowing you to predict how many cards will be drawn before the round ends

One side bet, allowing you to predict how many cards will be drawn before the round ends

How to Play Ultimate Andar Bahar

Ultimate Andar Bahar uses the same stream and basic rules as the standard Ezugi Andar Bahar Live. If you’re familiar with the game, you’ll have no problems figuring out how this table works either. It’s important to note that these two Ezugi Andar Bahar games share the same studio broadcast. Players who join in using the Ultimate Andar Bahar table have access to the multipliers and the increased stake. However, you’ll notice that the dealers never directly mention these mechanics, and now you know why – because it’s not relevant to every player watching.

Anyway, Andar Bahar is one of the simplest card games you can play at a casino.

It starts with the dealer drawing one card from a single deck of standard playing cards. This card is known as the “Joker.”

The dealer will then draw cards for two card piles – Andar and Bahar. They will place one card on the Bahar pile, then one on Andar, then one on Bahar, and so on. The round ends once one of the two piles draws a card of the same rank as the Joker card. That side is considered the winner.

As a player, you can bet on either Andar or Bahar. If you correctly guess which side will win by betting on it before the round starts, you get an even money payout.

However, the first card drawn in Ezugi Ultimate Andar Bahar always goes to Bahar. As such, Bahar has a slightly higher chance of winning, which is why it pays only 0.9:1.

If you’re playing on an Ultimate Andar Bahar table, you’ll also get access to Ultimate cards.

Essentially, a separate, virtual deck draws between one and three random cards every round. These three cards are assigned multipliers of 2x, 3x, or 5x.

In order to win these multipliers, you have to make a main bet beforehand. All bets come with a 20% fee to cover the increased winning potential.

If the dealer draws one of the multiplied cards before the round ends and places it on the card pile you wagered on, your payout is increased by the multiplier. You can theoretically stack multiple multipliers on top of each other if you get lucky enough.

Also, one such multiplier is assigned to one of the possible results of the side bet. More on that later.

Ultimate Andar Bahar offers industry-standard payouts for this type of game. That means the side that draws the first card (Bahar) pays 0,9:1. The other main bet, Andar, pays 1:1. The multipliers can increase both of these by 2x, 3x, or 5x.

If you’re lucky enough, you can draw several multipliers, which all stack multiplicatively. This means that the theoretical maximum payout in Ultimate Andar Bahar is 125x (three 5x multipliers.)

Make sure to choose the game that suits your taste and budget. For more extensive guides on live Andar Bahar basics, read this article.

The game includes the usual Ezugi user interface elements – live chat, audio/video settings, language options, and so on. You can find all of these in the top right corner.

The bottom left part of the screen is reserved for statistics and results. Result history covers the previous 100 rounds or so, highlighting streaks and statistical probabilities.

There is only one Ultimate Andar Bahar side bet available – the Number of Cards bet. It’s very common in live dealer Andar Bahar and revolves around predicting how many cards will be drawn in total before the round ends. Betting options are grouped into 5-number lines. For instance, you could predict that the Joker will appear after 11-15 cards.

The main bets and features of Ultimate Andar Bahar are a smashing success as far as we’re concerned. The added multipliers add just a little bit of extra “oomph” which makes the game feel more dynamic and exciting. You have more to think about besides just making the same bet over and over again, which is a welcome improvement.

As a downside, the side bets in this game are underwhelming. We like that the multipliers are also used here, but it seems Ezugi decided to slash the RTP rates across the board. This particular Number of Cards side bet always had the issue of being inconsistent – different options can have wildly different RTPs. Ezugi solved this problem by making all of the options’ RTP bad, which sort of removes the side bet as a viable strategic option.

Nevertheless, Ultimate Andar Bahar is the breath of fresh air Andar Bahar needed in order to stay relevant as a casino game.

What is Ultimate Andar Bahar?

Ultimate Andar Bahar is a live online casino variant of the Indian card game of Andar Bahar. The variant introduces random multipliers into the game, increasing profits at the cost of a 20% fee for all bets.

What is the maximum payout in Ultimate Andar Bahar?

The most you can win is 125x your stake if you manage to stack up three 5x multipliers on one bet. That outcome is extremely unlikely, though. Moreover, some outcomes of the side bet can also be increased all the way up to 500x.

What is the house edge in Ultimate Andar Bahar?

The house edge is different for each bet. It’s lowest for the Bahar bet, standing at just 2.18%.

Where can I play Ultimate Andar Bahar by Ezugi?

Any Ezugi-powered live online casino will do. Check out the links on this page for some recommendations.

20x wagering. Upper cap depending on the country. T&C apply.