Cricket War Live: Our Review, How and Where to Play

Cricket War Live by Ezugi is an online live dealer blackjack game released in 2021. It boasts an RTP of 96.27% with a minimum bet of $1 and a $500 maximum wager. The game is available on both desktop and mobile and presents an exciting new Casino War variant.

After the Evolution acquisition in 2019, Ezugi gained access to over 200 leading global operators. Aiming to boost growth, the company started geographically expanding towards other continents, namely, Asia. With the launch of Cricket War Live, Ezugi looks to dominate the regulated Indian gambling market. 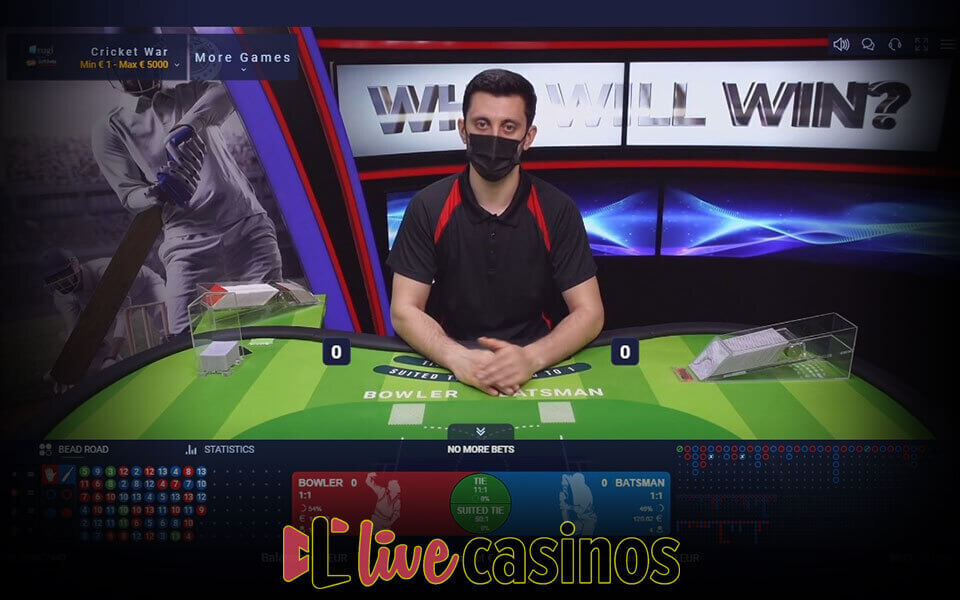 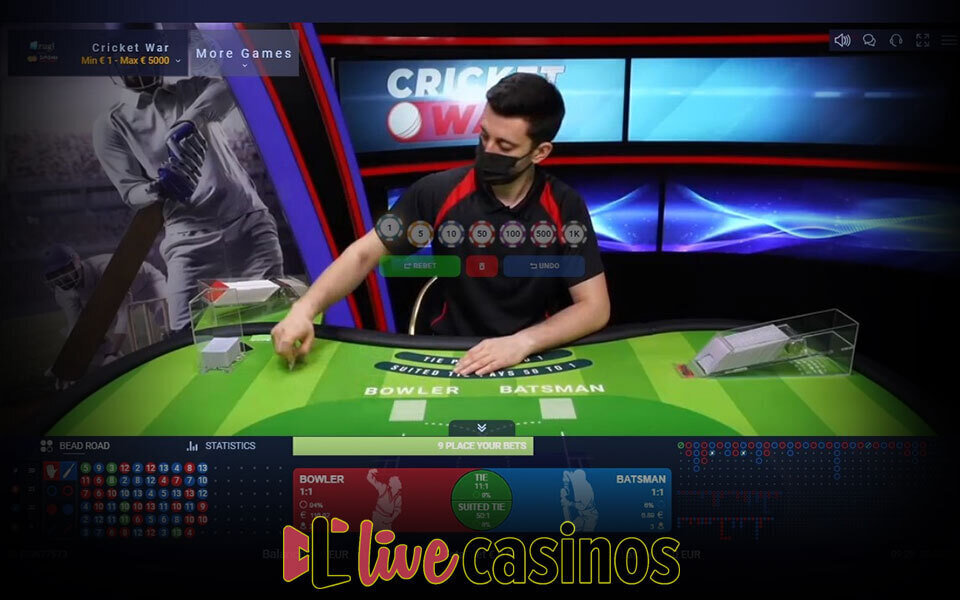 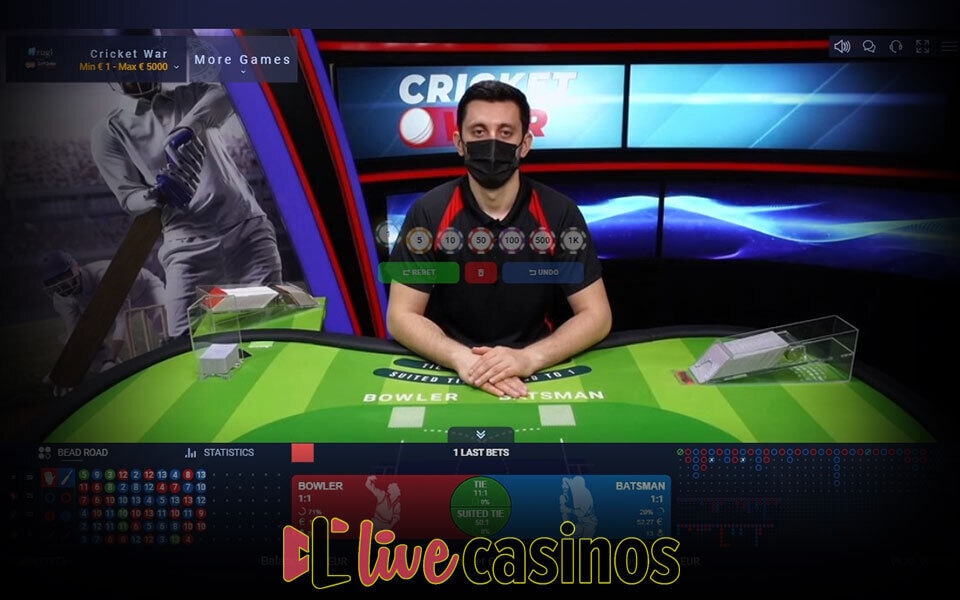 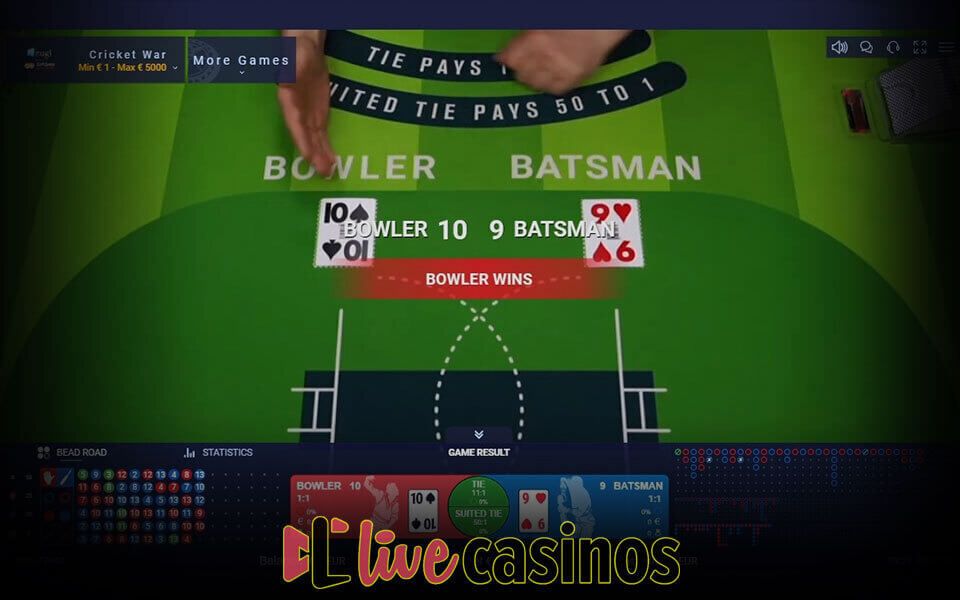 By the words of Ezugi, Cricket War is an all-rounder. First of all, it’s a remarkably simplistic casino game played with just 2 cards. Therefore, Cricket War uses a single deck in the shoe, which reshuffles regularly. That said, the extreme minimalism of this live dealer game renders counting cards almost impossible.

Ezugi has already tackled the realm of baccarat before in its exclusive Live Speed Baccarat. The similarities between Speed Baccarat and Cricket War lie within the aesthetic visuals. Additionally, they are both card games. However, the latter is incomparably simpler in essence and by the rules. The aim in Cricket War is to guess whether the Bowler or the Batsman will receive the highest card. The game developer has not yet revealed the max payout in Cricket War. But based on the uncanny resemblance with Casino War, we assume that the max payout is winning the Tie bet for 10:1.

Cricket War is an extremely easy game to learn and master and is thus beginner-friendly. Bound to conquer the Indian gambling market, it also stands great chances of becoming a global fan-favorite. If you are a cricket sports fan and enjoy a game of Casino War, we recommend reading our Cricket War Live review.

High winning probabilities of over 50%

How to Play Live Cricket War

Cricket War by Ezugi follows the Common Draw rules, meaning that all players receive the same cards. From that point on, it is up to each player to decide what card they want to play. Essentially, you get to make your own guess about whether the Bowler or the Batsman will win. By making your independent decision, you hold your fate in your hands in this Ezugi live game.

When the round begins, the croupier opens bets. Players have around 20 seconds to place their stakes, which is when the dealer closes bets. As a fast-paced game, Cricket War takes just about a few seconds to deal. Additionally, as we’ve said before, there are only two cards in the game. In turn, it is possible play almost infinite rounds of Cricket War per hour.

Visually, Cricket War is the perfect blend of sports and live casinos. How so? Well, the live dealer title is directly inspired by the bat-and-ball game. Hence, even its two hands are called by the cricket players – Bowler and Batsman. In this sense, we could draw a similarity with baccarat or Andar Bahar, even.

The entire casino studio is furnished with cricket-related objects, and even the dealers are dressed in thematic uniforms. The table is covered by top-notch, authentic green felt, and is akin to a playing arena.

The objective of Cricket War is to have the highest-value card. But, how are cards ranked in the new Ezugi game?

Numbered cards keep their pip value, whereas the Ace is the highest-paying card. Faces cards are more valuable than numbered ones. However, some picture cards are worth more – King paying the most, followed by Queen and then, Jack. The rules of Cricket War state that suits are irrelevant in this card game.

At the time of writing this Ezugi Cricket War review, the supplier hasn’t yet revealed many details about the title. What we do know, though, is that the likelihood of beating the house is 50.27%. Combined with the 96.27%, the winning odds in Cricket War don’t seem too far-fetched. In essence, Cricket War is remarkably similar to Casino War. As such, it holds great odds of lowering the casino advantage in the player’s favor.

Moreover, the Casino War creator has not yet disclosed the max payouts for the Bowler and the Batsman. Nevertheless, a little bird has told us that the Tie Bet will pay 10 to 1.

Lastly, the betting range starts at just $1 and wraps with $500 per round. The table limits are according to the industry’s standards and are typical of most Ezugi table games.

We are thankful to Ezugi for drawing the players’ attention to the classic casino game. The only drawback is that many gamblers, particularly younger demographics, are not familiar with the concept.

The War of Bets guide may help create a Cricket War strategy. What’s more, the simple rules of Andar Bahar could apply to Cricket War beginners, too.

As far as Ezugi has been willing to tell, there are no side bets in Cricket War. This down-to-earth game with basic rules holds no secrets. The only thing players need to do is trust their gut feeling. Exactly for this reason is it crucial to manage your gambling bankroll wisely.

The game set-up in Cricket War looks like this. The dealer draws 2 cards out of the shoe. Then, he or she places them on their designated positions – Bowler or Batsman. The game is played with a single deck and only two cards are used in one round.

So, here are the available bets in Cricket War:

The odds of beating the dealer stand at 50.27%. It is likely that both the Bowler and the Batsman will pay even money. However, the LiveCasinos.com team will accordingly update the review in due time. The draw (Tie) occurs rarely but pays irresistibly more – 10 to 1.

Games of chance are infamous for draining the punters’ money balances. And now that you know that, there’s plenty you can do to prevent this from happenings. The most important step in playing casino games of luck is setting strict betting limits ahead of playing. That way, you avoid overspending overall. In the case of Cricket War, though, players cannot exceed their bankrolls as there are no wild side bets.

Our Verdict of Live Cricket War

All in all, Cricket War is an attractively simple Casino War-like game played with 2 cards and a 96.27% RTP.

As such, it exhibits favorable circumstances for both novices and experienced gamblers. The simple table game by Ezugi is equipped with the latest technologies and streamed live in HD quality. Multiple cameras follow the dynamic and fast gameplay, making it even more thrilling.

The cricket-inspired gaming environment will further entrance sports lovers. The cricket ground felt coats the surface of the table, adding to the authenticity. Moreover, each dealer wears a designer uniform inspired by the players on the field. And the best thing about it is that you don’t even have to play cricket, just know your cards, and that’s it!

For more info straight from the horse’s mouth, check out the Live Casinos interview with Ezugi’s Craig Luke!

What is Cricket War by Ezugi?

Cricket War from Ezugi will be quite a treat for anyone who enjoys Casino War. It follows similar rules and has a good advantage over the casino. Played with just 2 cards, it’s simple to learn and master.

How do I play Cricket War?

To play Cricket War for real money, you don’t need any other skills barring money management. No statistics, logic, or strategies affect the outcome of this live game. As it is a game of chance, most of it is just pure luck.

What are the RTP and payouts?

How do I always win at Cricket War?

You can’t always win games of chance, such as Cricket War. Instead, focus on maintaining a stable casino balance. Winning streaks are common occurrences in games of this type like roulette but it’s essential not to rely on them.

What Casino War bet is safer?

The least safe bet is the Tie, but it pays much more. The two main bets, Bowler and Batsman, pay less but are more risk-averse.

What are the best Ezugi live casinos?

The top casinos powered by Ezugi include Dafabet, 1xBet, and LeoVegas.

20x wagering. Upper cap depending on the country. T&C apply.