Live Mega Fire Blaze Roulette: Our Review, How and Where to Play

Mega Fire Blaze Roulette Live by Playtech is a live dealer roulette game released in 2021. It boasts an RTP of 97.30% with a minimum bet of $0.2 and a $3,000 maximum wager. The game is available on both desktop and mobile and features the latest, exciting roulette multipliers. 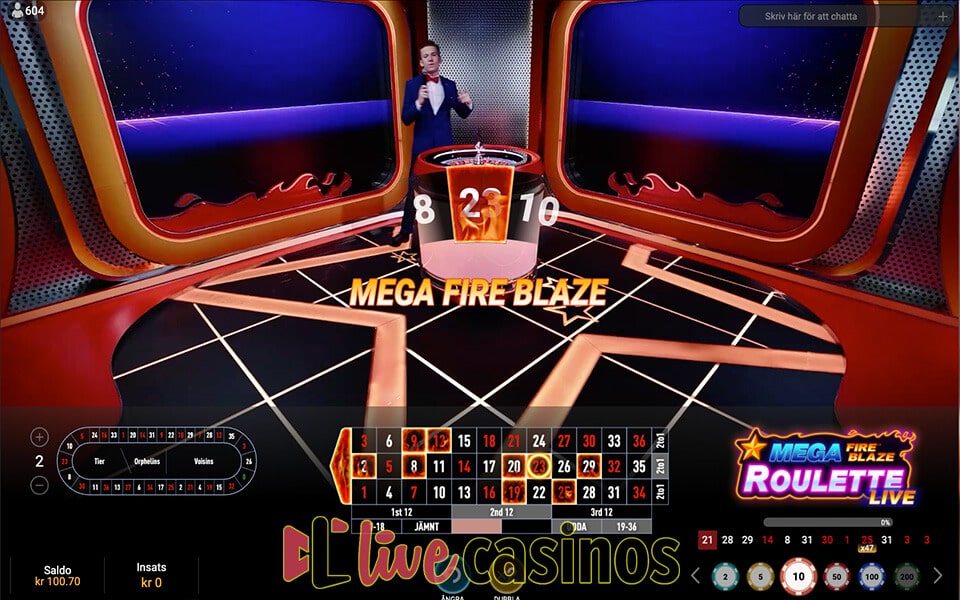 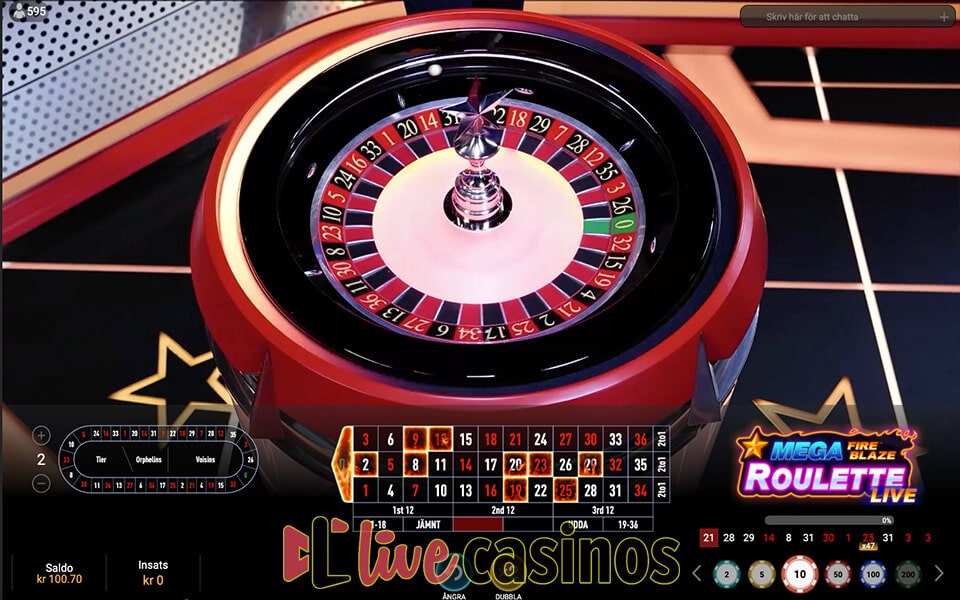 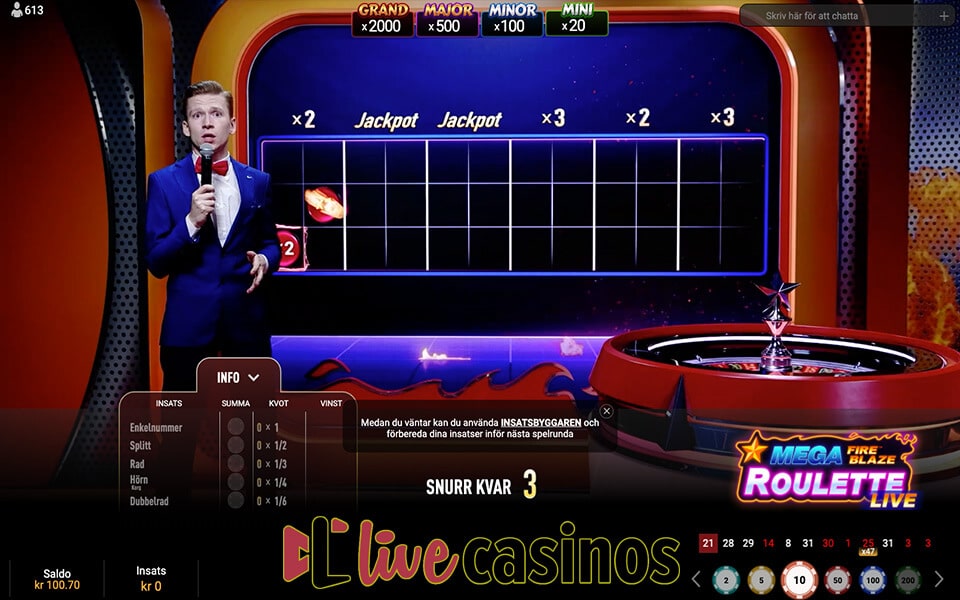 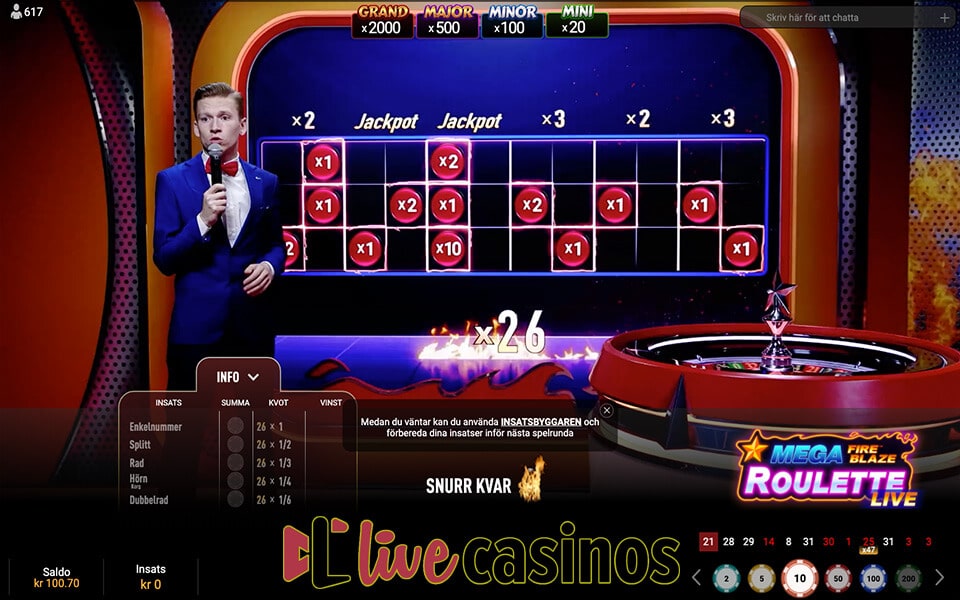 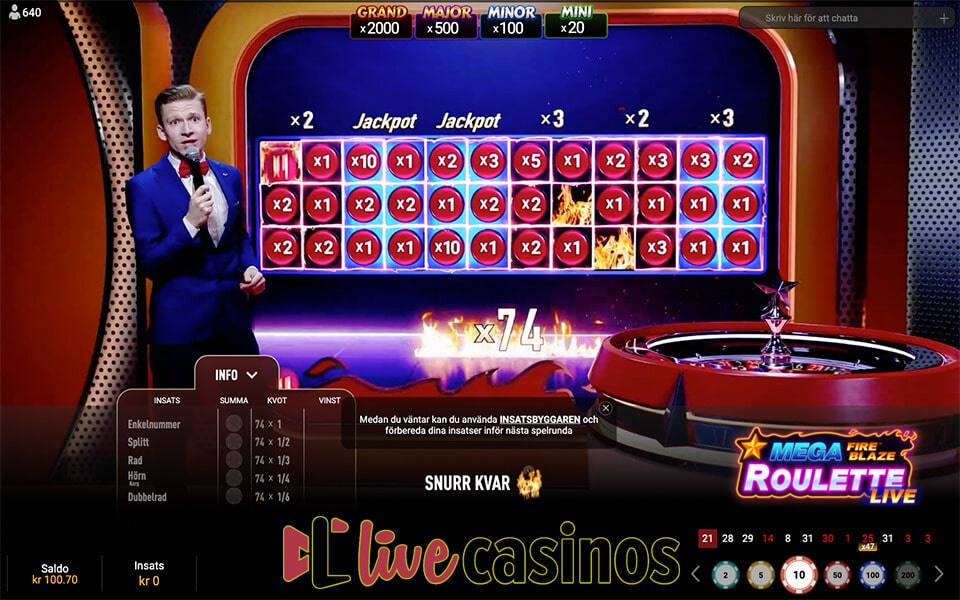 Spectacle, fun, and standing out from the crowd are easily the biggest current trends in top live casinos. Evolution has always been the leader of such titles, but they’re not alone. If there’s one software provider that can parry Evolution in terms of size, resources, and talent – it’s Playtech.

Mega Fite Blaze Roulette is one of the beloved “roulette with a twist” games that have been winning awards for years. Playtech already has one such title with Quantum Roulette, but this new release is quite different. The bonuses are again randomly assigned. However, the Mega Fire Blaze Roulette Live bonus round is quite a bit more complicated than a simple multiplier.

As you might expect from a flagship Playtech live casino release like this, the studio is nothing short of impressive. It’s big, colorful, and generally resembles a set at a TV game show. The presenters are not much different, offering commentary and engaging the audience.

If you believe even top live roulette games have been getting stale lately, you’ll surely love this one. The only major flaw is the name – it’s quite the mouthful.

Bonus game multipliers that can go up to a staggering 10,000x.

The bonus applies to all Inside bets.

Bet Creator feature that allows you to quickly place favorite bets, no matter how complex.

Once you strip away the flash and features, this is a classic online European roulette wheel. That means that it has 37 pockets with only one green zero. To play Mega Fire Blaze Roulette Live, find the game in your favorite Playtech casino. You’ll see a typical roulette betting table, which you can use to place classic roulette wagers.

An unlimited number of players can connect at the same time, so you don’t have to worry about table slots. Moreover, the stream is open 24/7, 365 days a year.

You have around 20 seconds to place your bets before the presenter spins the wheel. Unlike mot multiplier roulette casino games, this is not an auto-roulette wheel. The presenter is also a croupier and will spin the classic wheel. Before that happens, though, up to 5 Fire Numbers will be selected. However, up to 10 may sometimes appear due to the Fire Blast feature. More on these later.

As always, the wheel spins until the ball lands in one of the pockets. If you wagered on the pocket’s number, you win! If the number also happens to be one of the round’s Fire Numbers, the bonus game will start. However, this will only happen if you won by placing an Inside bet. This includes Straight-up, Split, Corner, Street, and Line bets.

If you’re looking for details on the bonus game, look in the Special Features of this Mega Fire Blaze Roulette Live review.

Want to see how Mega Fire Blaze Roulette Live works in action? Check out the video below! Though it doesn’t show a full actual round of the game, it’s a great way to see the presentation and basic mechanics. It’s quite clear Playtech invested a lot of time, effort, and creativity into this release.

Unfortunately, there’s no Mega Fire Blaze Roulette Live demo available to the general public. As such, you will have to lay down a stake to try the game. The good part is that you won’t regret it – it’s easy to get into this game, and even easier to keep playing.

With live table casino games like these, the cash to cover the bonuses has to come from somewhere. Since all inside bets in Mega Fire Blaze Roulette Live can be multiplied, they all offer reduced payouts. Compared to regular European roulette, Straight-up, Split, Corner, Street, and Line bets have been slashed.

Of course, this Mega Fire Blaze Roulette Live paytable does not take into account the bonus multipliers. Not all of them can reach the same maximum payout. The riskiest Straight-up bet can go up to 10,000x, while safer options like Line only go up to 1,666x. However, the overall RTP based on Even Money bets remains at 97.30%.

If you place an inside bet, one of the covered numbers can be marked as one of the five Fire Numbers. Occasionally, a Fire Blast round will also be triggered, marking 10 numbers instead of 1-5. This increases the probability of hitting a fire number to almost 1 in 3.

If the Mega Fire Blaze Roulette Live bonus round is triggered, the action moves to a large table on a screen. The table is a 3×12 grid, divided into six 3×2 sections. Each of these six sections is assigned a 2x, 3x, or 5x multiplier. Additionally, some are marked as Jackpots. These remain hidden for now, but can be 2000x, 500x, 100x, and 20x.

Then, multipliers ranging from 1x to 50x cascade onto the grid. Some stick around and increase the multiplier. This happens three times; however, if at least one multiplier sticks to the grid, this count is increased by 1. The bonus round ends when the grid is full or the cascade counter reaches zero.

If one of the 3×2 sections has all grid positions filled, the section’s multiplier is applied to the grid bonuses. If it’s a Jackpot section, the size of the Jackpot is randomly decided and applied. Finally, all the multipliers in the grid are added together and applied to the bet.

In the Mega Fire Blaze Roulette Live Playtech game, only Straight Up bets receive the full bonus multiplier. The total is halved for Splits and divided by 3 for Split bets. Similarly, Corner bets only receive a fourth of the total, and Line wagers 1/6th.

This release is easily one of the biggest innovations in live casino roulette we’ve seen in years.

It’s an overall fun game, and the fact the RTP rate remains consistent is a great advantage. However, the multipliers can vary greatly in size and scope.

Depending on your tastes, this can be good or bad.

Essentially, if you’re looking for something like Quantum or Lightning roulette but with more volatility, you’ve come to the right place.

Even if this doesn’t apply to you, Mega Fire Blaze Roulette Live is unique and worth trying out.

Yes. With a company like Playtech behind the wheel, you don’t really have to worry about whether the game is rigged. Playtech is a highly respected industry leader, and their releases are verified for transparency. After all, they own several remote gambling licenses, and each of those has requirements in terms of fairness.

Where can I play Mega Fire Blaze Roulette?

You can find this game at any online casino that features live dealer games from Playtech. If you want a quick recommendation, you can find additional options for Playtech casinos here.

It’s difficult to say. Both games are well-crafted equal in terms of RTP. However, Mega Fire Blaze Roulette is much more volatile and includes Inside bet multipliers. Also, it’s more original – there’s no other game out there quite like Mega Fire Blaze Roulette Live. That’s why we slightly prefer it to Quantum Roulette, but that comes down to personal preference.

Is there a Mega Fire Blaze Roulette Live demo?

No, there is no widely available demo version for the game. However, you can find out all the information you’ll need in our Playtech Mega Fire Blaze Roulette game review.

What is the biggest payout in Mega Fire Blaze Roulette Live?

What is the best Mega Fire Blaze Roulette Live strategy to win?

The whole point of this title is in the bonus game multipliers. They are features you don’t want to miss out on. The best way to avoid missing them is by covering as much of the betting table as possible. As such, Neighbor and Call bets are a great way to play. For example, the Romanosky roulette betting system is a great way to have multiple inside bets on the table.