Lightning Roulette: Our Review, How and Where to Play

Live Lightning Roulette by Evolution is a live dealer roulette game released in 2018. It boasts an RTP of 97.30% with a minimum bet of $0.20 and a $2,000 maximum wager. The game is available on both desktop and mobile and features multipliers and Evolution’s professionally trained live dealers. 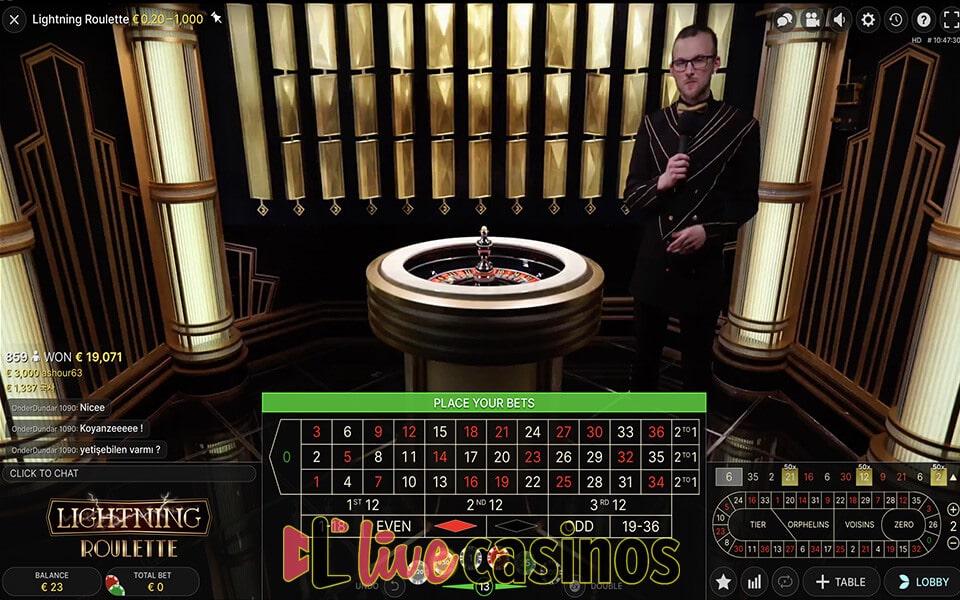 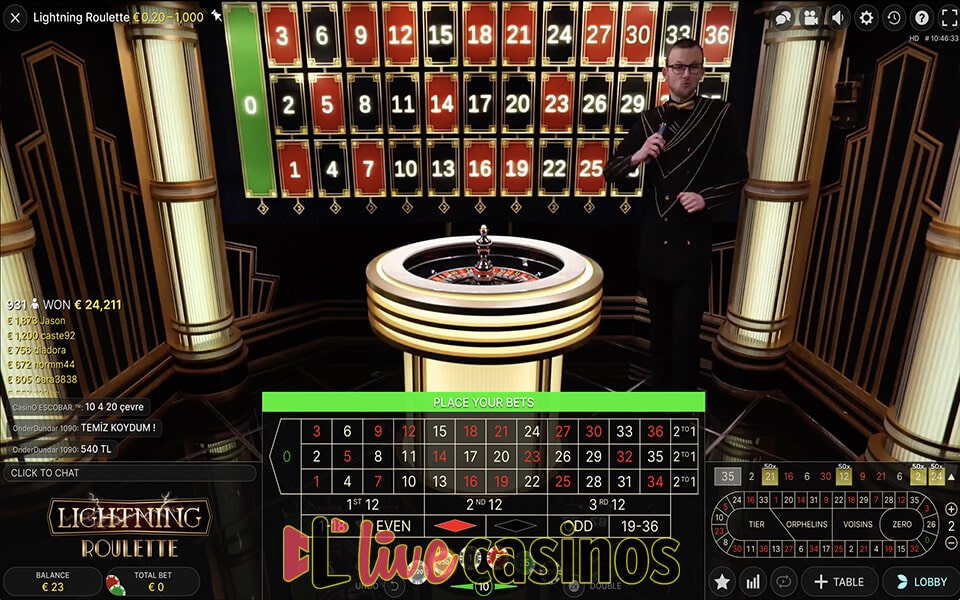 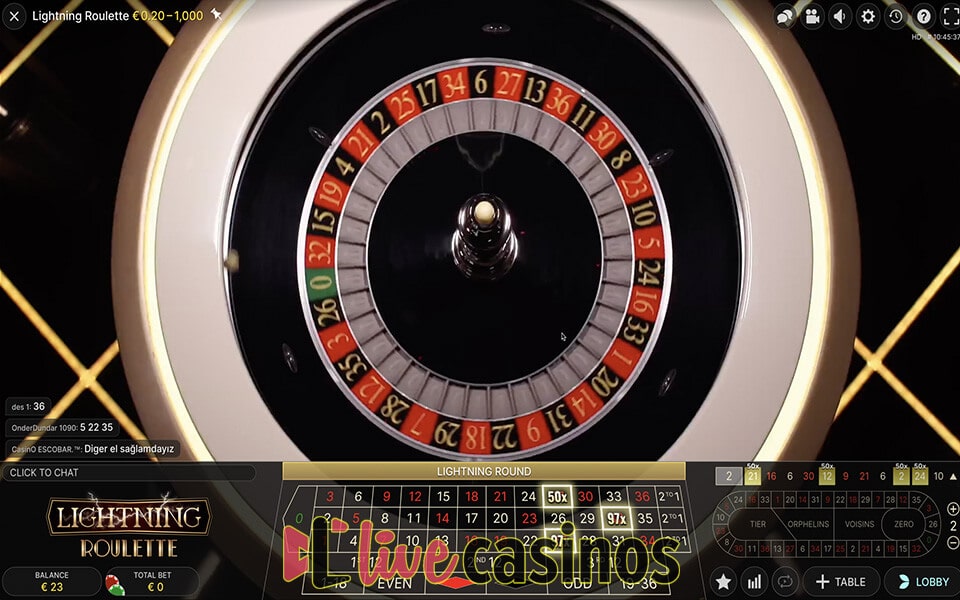 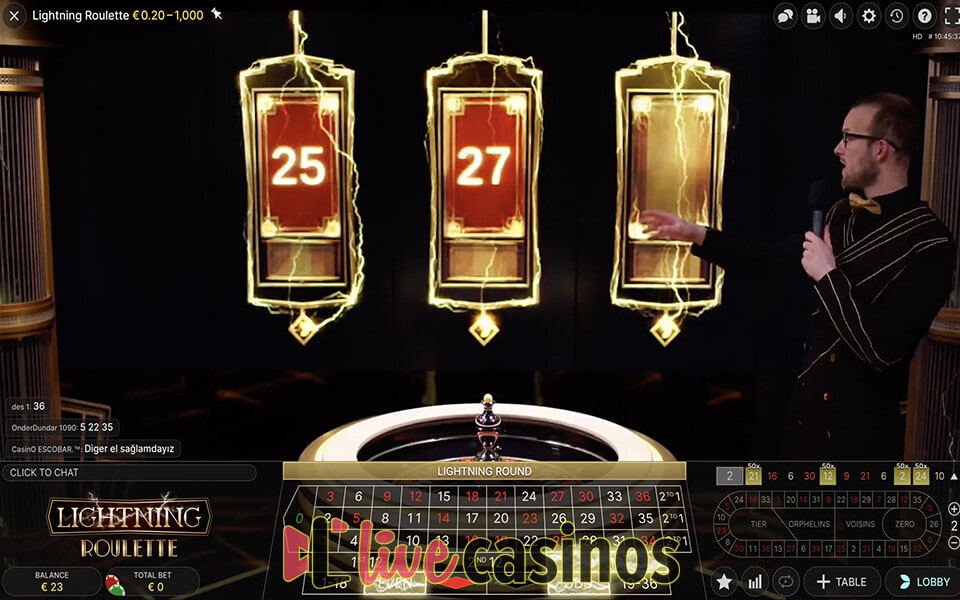 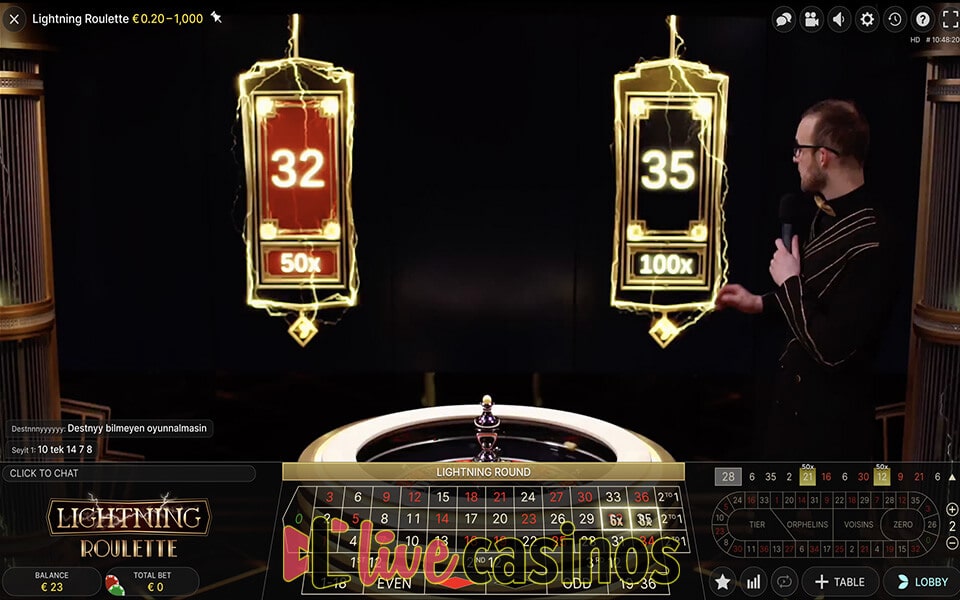 An absolute authority when it comes to Live Dealer tables software, Evolution has once again gone that extra mile and provided an extended and enriched version of a standard Roulette game. In addition to the traditional betting, Lightning Roulette offers two extra winning chances by introducing Lucky Payouts and Lucky Numbers betting options, and generous multipliers.

The intensity and the authenticity of the entire set-up is further enhanced with the studio’s glamorous and futuristic background, which lifts the game of Roulette to an entirely different level and provides a unique gaming experience that no other software developer has so far managed to match. If you like a game with a sense of spectacle, you should try to play Live Lightning Roulette.

As a live dealer roulette game, this title has an unlimited number of seats. The wagering limits are very broad at $0.2 – 2,000, and should be able to accommodate any budget. It’s steamed from Evolution’s flagship studio in Latvia, so the video quality is peerless.

Insight into other players' bets and previous round results/statistics

Without the multipliers, this game is a more-or-less standard version of European Roulette. This means that you’re just trying to predict which number the ball will land on after the dealer spins the wheel. The betting table contains the full range of roulette bets, including inside and outside bets.

To play Lightning Roulette for real money, here’s what you have to do:

As you can see, you don’t need a huge Lightning Roulette strategy to enjoy this game. The experience is further enhanced by the incredible presenters. They are what turns this simple live casino game into a real show.

Lightning Roulette has to be seen if you are to get what all the fuss is about. Below, you’ll find a short video with some great gameplay moments. You can see how multipliers work in Lightning Roulette as well as the breath-taking studio and excellent presenters.

If this sneak peek doesn’t immediately get you interested in the spectacle, nothing will. It’s truly an example of what the best live casino games can be with enough effort and work. Evolution Lightning Roulette has won multiple awards, and it’s easy to see why.

The payouts of Lightning Roulette are more or less identical to those of standard roulette wheels. You can find the exact information in the table below. However, the straight-up bets are one exception. Instead of the usual 35:1, the payout was decreased to 29:1. This was done to cover the costs of the massive multipliers.

As you may as well know, European roulette odds are the best you can expect from live roulette games. Whether the decreased odds for straight-up bets are worth the multipliers, however, is up to you. We can safely say that the mechanic is fun, though, and the change in payouts maintains the 97.30% RTP rate.

Along with original settings and never-before-seen live studio game surroundings (at least when Roulette is concerned), multipliers are the crucial elements that make this game stand out. They can be triggered during every single spin of the wheel and the players can potentially increase their bet by x500.

The size of the multiplier is determined randomly, by the landing position of the ball. During every round, 1 to 5 numbers will be selected and hit by the lighting, generating from 50:1 to 500:1 multiplier. The more people are betting on a certain number the more that particular number will shake, indicating how popular that bet is. After the bets are closed the dealer pulls the lever to start the spins and the lightning will multiply the bets of the most fortunate players.

Note that the multiplier can only apply to single-number, straight-up bets. Also, just because your number was multiplied, doesn’t mean you’ve won yet. The number also needs to land on the wheel spin. Moreover, the multiplier completely replaces the original straight-up roulette bet odds, albeit with a higher number.

Evolution is catering to a wide audience and, as one of their prominent live dealer games, Live Lightning Roulette is available in several different languages. Once you load the game screen and sit down at the virtual table, there is an option to customize the interface in the following languages:

Our Verdict of Live Lightning Roulette

The Evolution Live Lightning Roulette game became an instant hit as soon as it came out, and it remains so to this day.

Let’s put it this way – roulette is one of the most popular live casino games on the planet.

Most of them are almost identical to each other, though. Evolution simply took this formula and spiced it up a little to stand out from the crowd.

However, once you take into account the amazing TV-quality production, it’s easy to see why players are drawn to it.

It’s simply so good at what it does that most of the competition is left behind in the dust.

No, Lightning Roulette is not rigged. Evolution is an immensely respected casino software provider with tons of licenses. The game statistically favors the house over players, but that’s just how roulette works.

How to win on Lightning Roulette?

The same as in any other roulette game – bet on the correct numbers. However, our advice is to use straight-up bets to take advantage of the multipliers. You can find more details in the How to Play section of the Lightning Roulette review.

How to Bet at Lightning Roulette?

Simply wait for betting time to begin between rounds and have a bankroll available. Click on one or more of the available wagers on the betting table to place your bet. You can also adjust your stake size before each bet. That way, you can place different-sized stakes on several bets in one round.

Where to play Lightning Roulette?

Is there a Lightning Roulette strategy to win?

Lightning Roulette is ultimately a game of chance and not skill. However, you can still use all the other best roulette strategies, such as staking plans and betting systems. You can also find more Lightning Roulette tips in the review above.