First Person Lightning Blackjack: Our Review, How and Where to Play

First Person Lightning Blackjack by Evolution is an online live dealer blackjack game released in 2021. It boasts an RTP of 99.56% with a minimum bet of $2 and a $5,000 maximum wager. The game is available on both desktop and mobile and presents an exciting new online RNG blackjack variant.

After successfully launching an entire roster of Lightning live casino games, Evolution turned to RNG games. It took them the longest to develop Lightning Blackjack Live, which quickly rose to popularity. But to add to the thrill, Evolution created its RNG iteration – First Person Lightning Blackjack. Welcome to the Live Casinos review of this fabulous RNG-powered game. 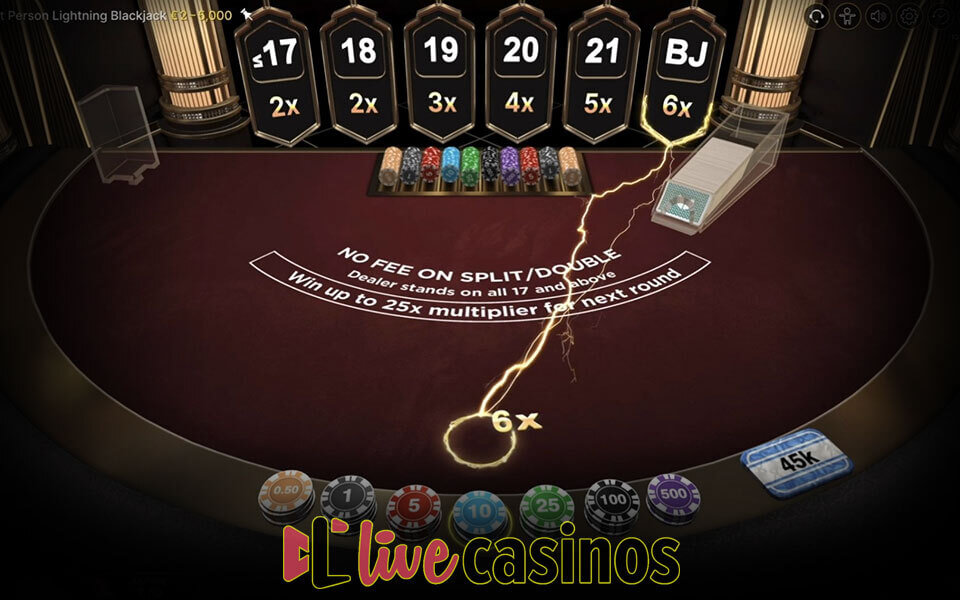 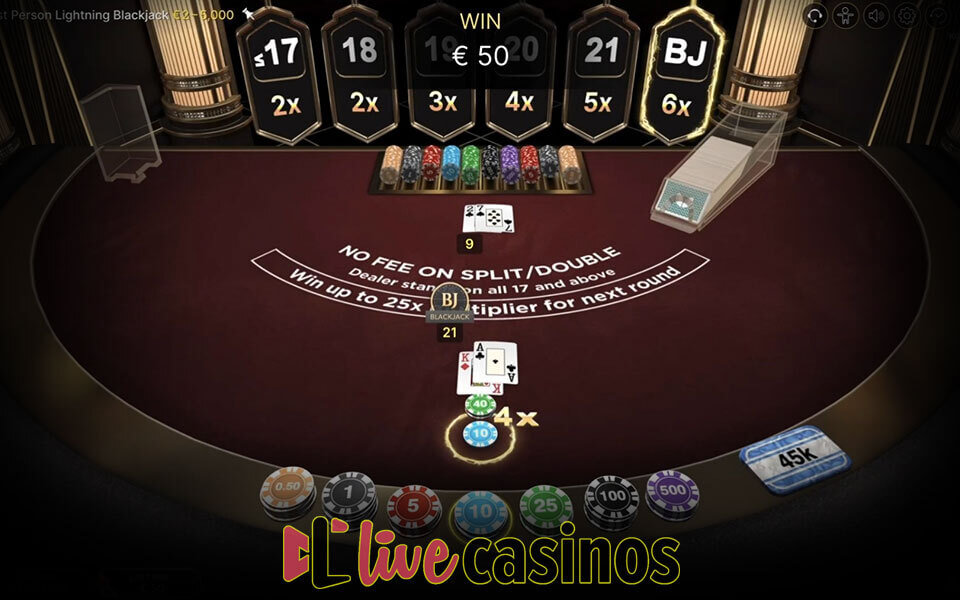 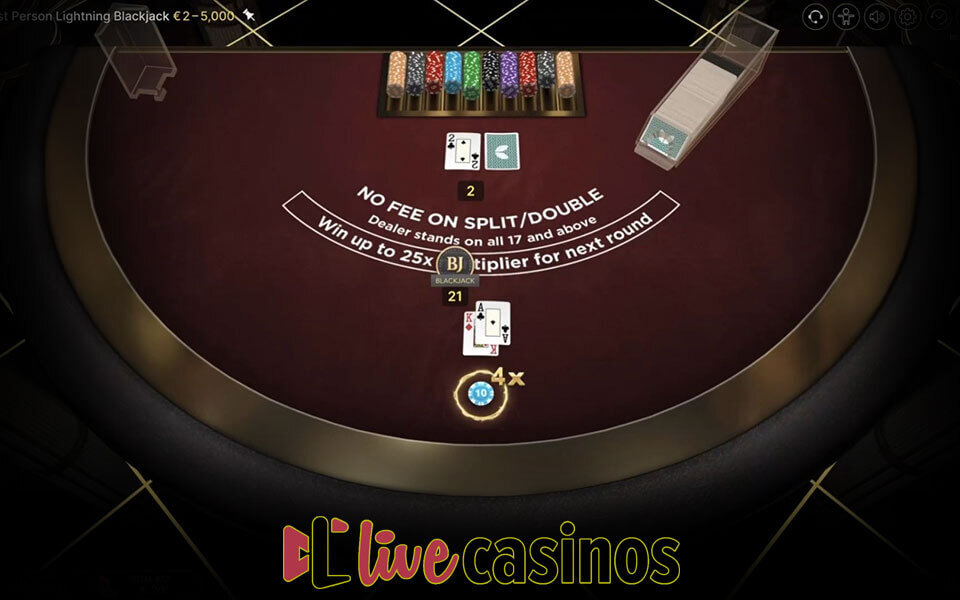 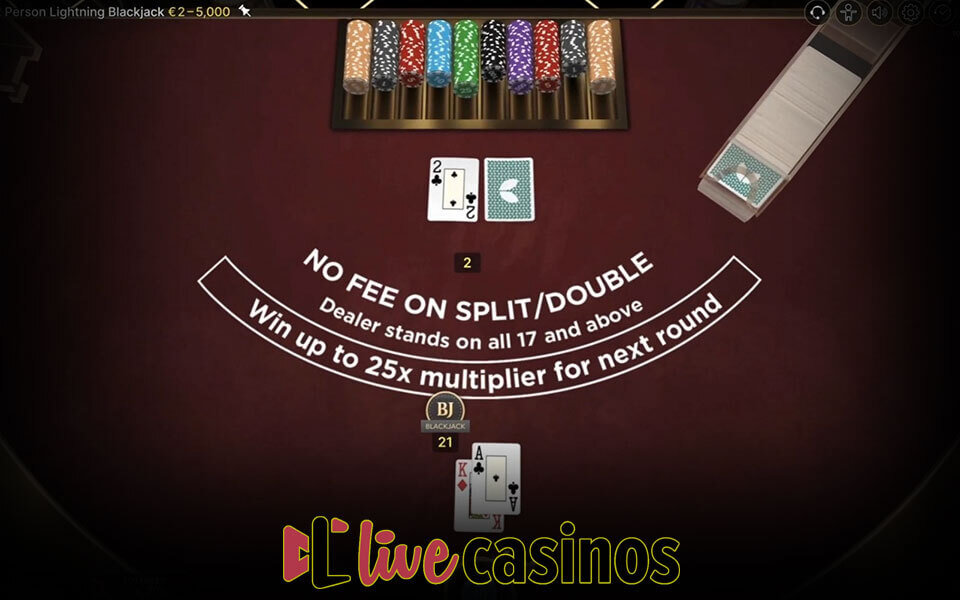 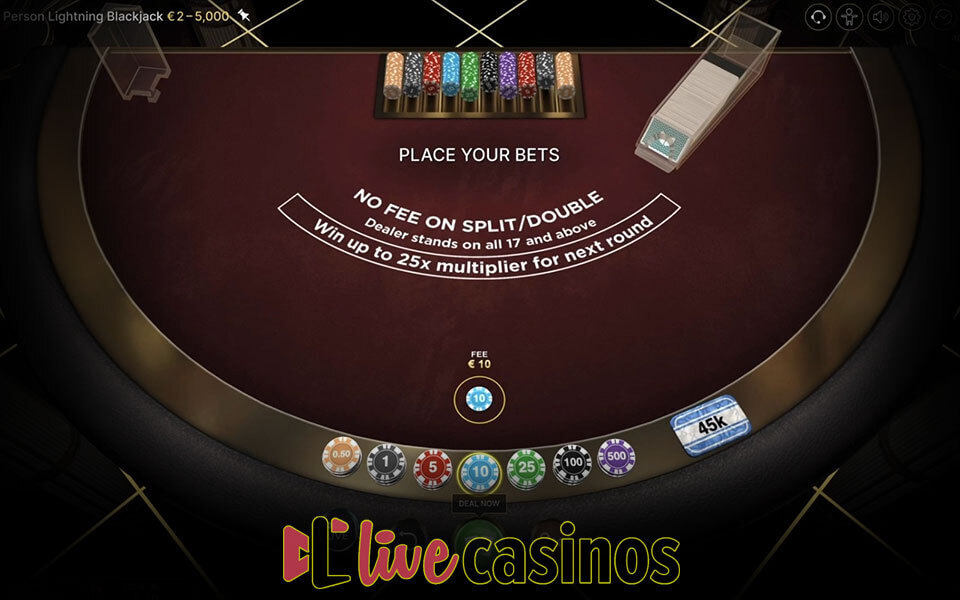 Evolution’s new game is better than all other virtual blackjacks because it looks hyper-realistic. In all honesty, it’s hard to see it apart from the live dealer version. The visuals and animations are cutting-edge, with crispy transitions and devoted attention to detail. Each winning hand results in a multiplier in the following round, which we’ll explain in this First Person review.

If you’re interested in playing First Person Lightning Blackjack for real money, you’re in the right place. The Live Casinos team goes into detail about the gameplay, blackjack rules, and how to win multipliers. Know, however, that there are no crazy side bets; this version primarily focuses on Lightning Multipliers.

Up to 25x Lightning Multipliers

Virtually no difference to live casinos

If you’ve played any blackjack before, playing this Evolution game will be a piece of cake. All standard rules apply, meaning you can Hit, Stand, Double, or Split as per usual. The return to player value of 99.56% is more than favorable.

The original idea was to place a multiplier on designated randomly generated cards. However, by the words of Evolution CPO Todd Haushalter, it all ended up Lightning Frankenstein Blackjack. And that just wasn’t fun. Plus it overloaded the player’s bankroll because they were splitting so often, so they gave up the idea. In other words, this is why it took Evolution so long to develop Lightning Blackjack.

So, instead of featuring Lightning Cards, the world’s best live dealer game developer came up with a fantastic idea. Lightning Blackjack was born when an ingenious concept made its way to the masterminds at Evolution. Instead of adding random Lightning Cards, they introduced a simple rule that soon became a complete game-changer.

Evolution avoided turning blackjack into a game of chance by rewarding every winning hand – in the next round.

As with every blackjack version, the best hand is contained in the game’s name. So, in the best-case scenario, you’ll receive a natural, which is an Ace and a picture card. The payout is optimal, but it’s not the only way to win. In the Lightning rendition, though, you get to scoop a multiplier in the following round, as well. Therefore, it is recommendable that you keep playing even after hitting a natural.

Face cards are worth 10, and Ace is either valued 1 or 11, depending on the other cards in your hand. Cards from 2 to 10 keep their pip value. As we said, nothing special regarding card rankings takes place here. If you’re a seasoned blackjack player, you’re more than ready to play the First Person version of it.

Regarding other wins in the game, there aren’t any surprises in this rendition. The detailed paytable follows:

To learn more about how to play the insurance bet, click here. Make sure you know whether the insurance is worth it for you before staking real money on it.

In essence, First Person Lightning Blackjack is just a boosted version of classic blackjack online. With amplified potential, but blackjack nonetheless. With that in mind, know that playing First Person Blackjack variants isn’t any different from playing any other RNG blackjack.

However, if you’re considering switching to live games, we would recommend Evolution Power Blackjack and Free Bet Blackjack with cool side bets.

View First Person Lightning Blackjack not as a hunt for multipliers, but rather a comfortable basic strategy game with a twist. Instead of chasing after surprise cards with win boosters, you should just follow your standard playing system. Whatever you usually use when playing blackjack for real money is applied to the First Person Blackjack.

The twist we mentioned, though, does not occur at random as seen in the famous Quantum Blackjack by Playtech. This adrenaline-charged variant forces players to borderline drain their bankrolls to reach the multipliers. Not Evolution, though. In First Person Lightning Blackjack, players get to directly influence when their multipliers land. The only thing you need to do to get a multiplier is to have a winning hand.

And we don’t need to tell you how to play the game. If you’ve adopted the perfect basic strategy or can count cards, you’re on the right path.

All that said, it’s important to remember that to qualify for multipliers, you must double your stake. For example, if your default coin size is $2 per round, you must wager $4 for a chance to win a multiplier in the next round. In our opinion, this is not a high price to pay for such high winning odds. Let us remind you – the house edge in Lightning Blackjack is just 0.44%!

First of all, it has an astounding payback percentage combined with a low house advantage. It allows players to place any bet, including splitting and doubling down. Indeed, there are no mad side bets like Lucky Lucky, 21+3, or Perfect Pairs, but the Insurance Bet pays 2:1.

The Multipliers are under your control, which makes the game feel extremely customized. And if you ever get bored with the impersonal software, you can GO LIVE to a live casino instantly.

What is First Person Lightning Blackjack?

Evolution’s First Person Lightning Blackjack is a highly rewarding, 99.56% RTP, RNG-powered casino game loaded with multipliers. Every winning hand triggers a multiplier in the following round that lasts 180 days.

No Evolution Gaming games are rigged due to strict auditory standards and player protection protocols.

What First Person Evolution games are there?

How much does it pay?

Lightning Blackjack pays 3:2 for a natural, and 2:1 for the insurance bet. Any winning hand lower than 21 pay 1:1.

Standard First Person Blackjack has a 99.28% RTP, while the Lightning variant boasts a 99.56% return.

Where can I play First Person by Evolution?

Most Evolution live casinos offer the First Person catalog, such as Mr Green and LeoVegas.