Age of the Gods Bonus Roulette: Our Review, How and Where to Play

The Age of the Gods Bonus roulette is the newest addition to the already impressive pantheon of Playtech games. This giant of the industry has been taking over the live casino game market for a while now. However, they remain best-known for their thematic slot experiences, so combining the two seems like the logical next step.

The theme is not the only thing that ties into the wider universe of Playtech casino games, however. The biggest selling point of Playtech’s Age of the Gods Bonus live roulette is the progressive jackpot feature. This feature is shared with the standard Age of the Gods roulette. However, the Bonus version throws in a special Bonus feature which adds a bit of slot gameplay.

For now, let’s look at the core offer of this game. Playtech were one of the first major gaming software developers to master the art of theme in casino games. As such, the powerful theme is the most striking thing about this roulette. The beautiful sets in Latvia immediately set the Age of the Gods Bonus roulette live game apart from the competition. Instead of the typical imitations of brick-and-mortar casinos, players are presented with an ancient Greek temple. Of course, the presenters a dressed accordingly, further adding to the ambience. Even the table is made of stone!

On a more technical level, the extra Bonus pocket on the wheel throws off the RTP rate slightly. In practice, it shifts the standard RTP rate to that of American roulette – 94.74%. However, this little-side game can turn out to the players’ advantage. 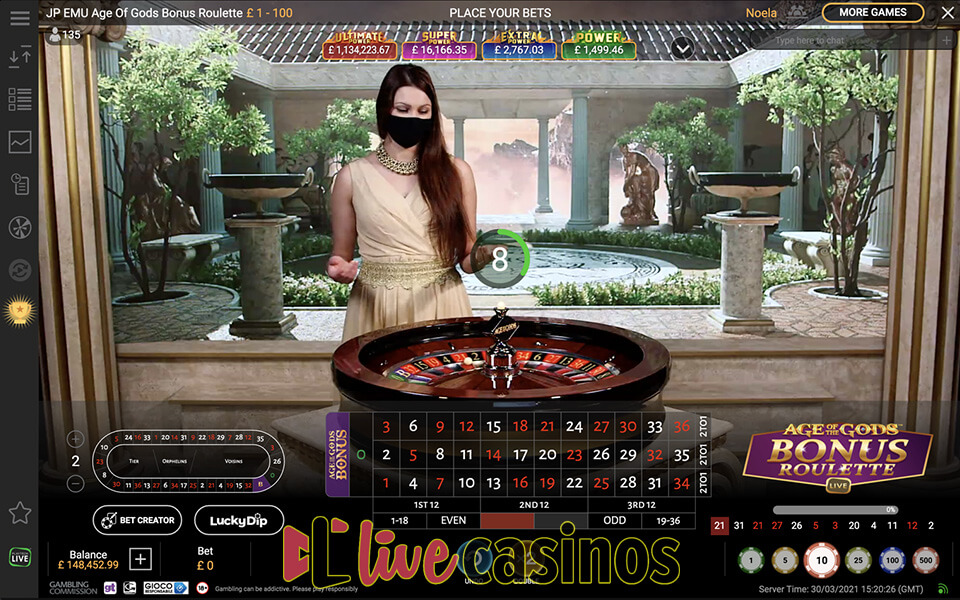 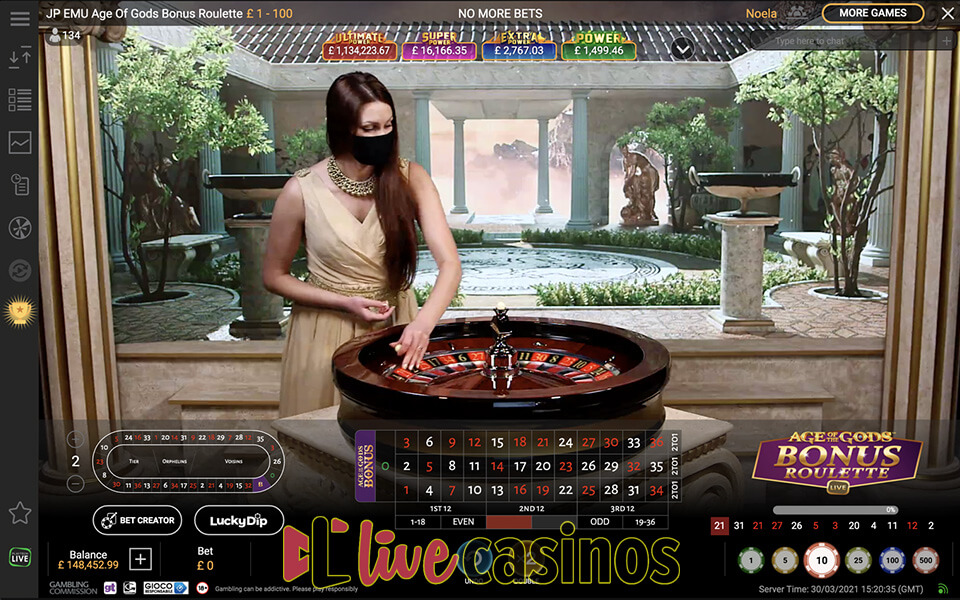 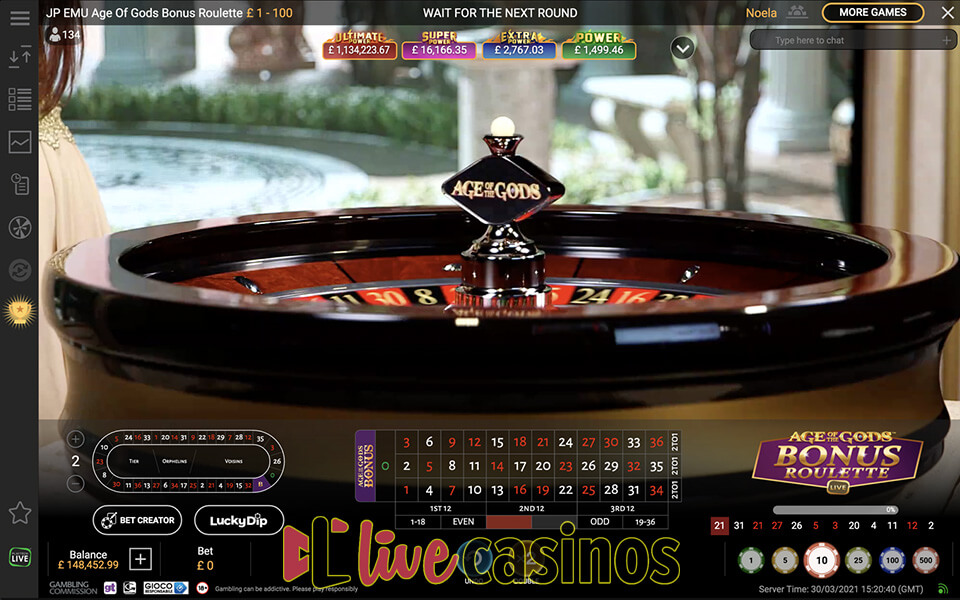 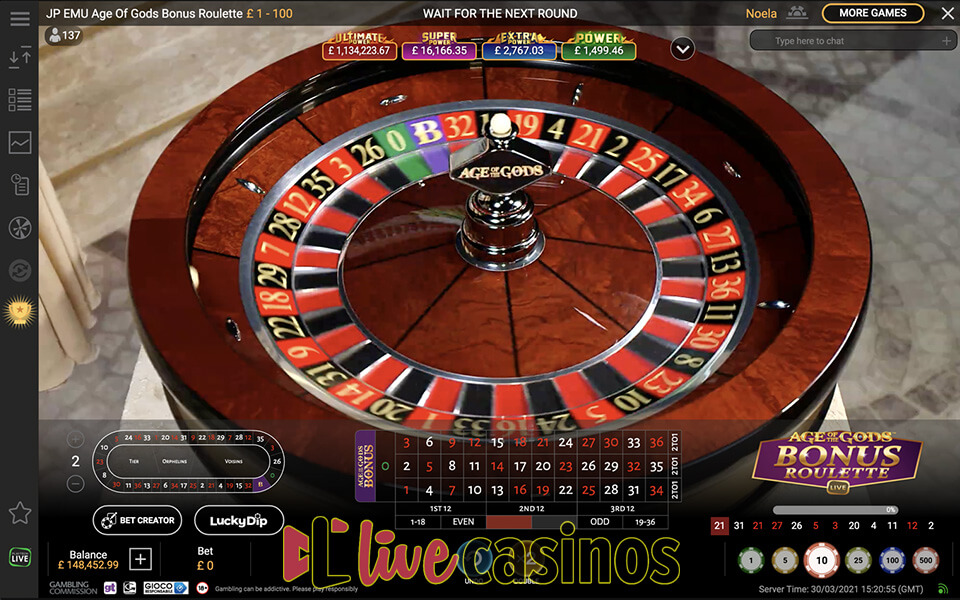 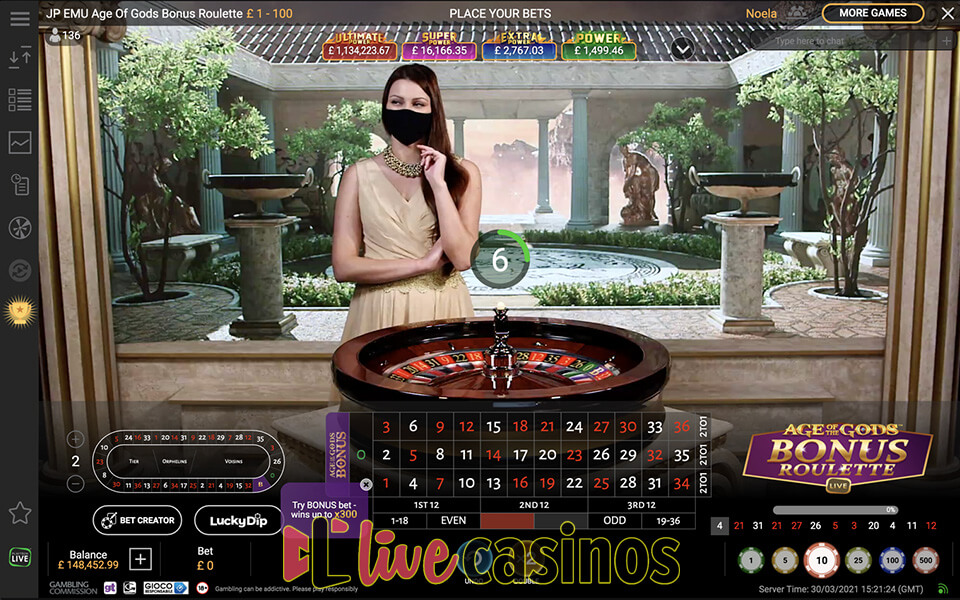 High-quality roulette stream with a unique theme and concept.

The Bonus feature makes it riskier, but potentially more rewarding than the standard roulette.

The Jackpot adds even more excitement and potentially huge wins.

Connects to other Age of The Gods games and products, including a slots minigame.

One of the better interface layouts we’ve come across.

How to Play Playtech Age of the Gods Bonus Roulette Online

Our Verdict of Live Age of the Gods Bonus Roulette

Live roulette games typically don’t leave a lot of room for nuance. That’s why it’s difficult to rate them without relying strictly on the technical aspects. As our Age of the Gods Bonus Roulette review points out, this game excels in this department. Its true appeal, however, lies with the jackpot. It provides that little bit of edge that is enough of a reason to chose this game over another one. The Bonus slot, on the other hand, is a bit questionable. It’s fun, but the RTP is ultimately negatively impacted.