Peek Baccarat Live: Our Review, How and Where to Play

Peek Baccarat Live by Evolution is a live dealer baccarat game released in 2022. It boasts an RTP of 98.80% with a minimum bet of $1 and a $10,000 maximum wager. The game is available on both desktop and mobile and introduces exciting new mechanics to standard live casino baccarat.

The Peek Baccarat variant allows players to place bets after some of the cards have been revealed. It’s a revolutionary innovation to punto banco even by Evolution standards, adding a lot of depth to the core gameplay. Let’s dive into our Evolution Peek Baccarat review to find out more. 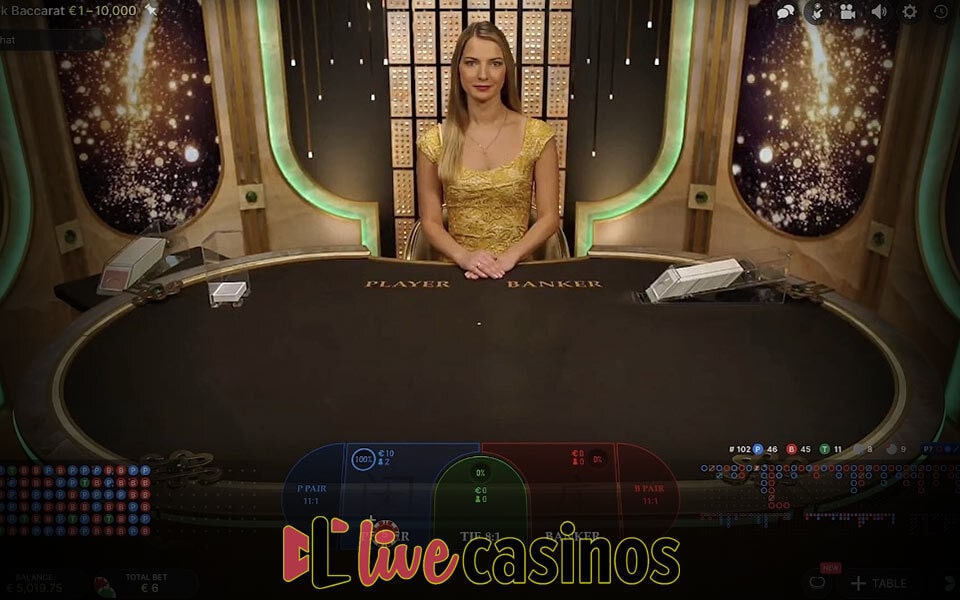 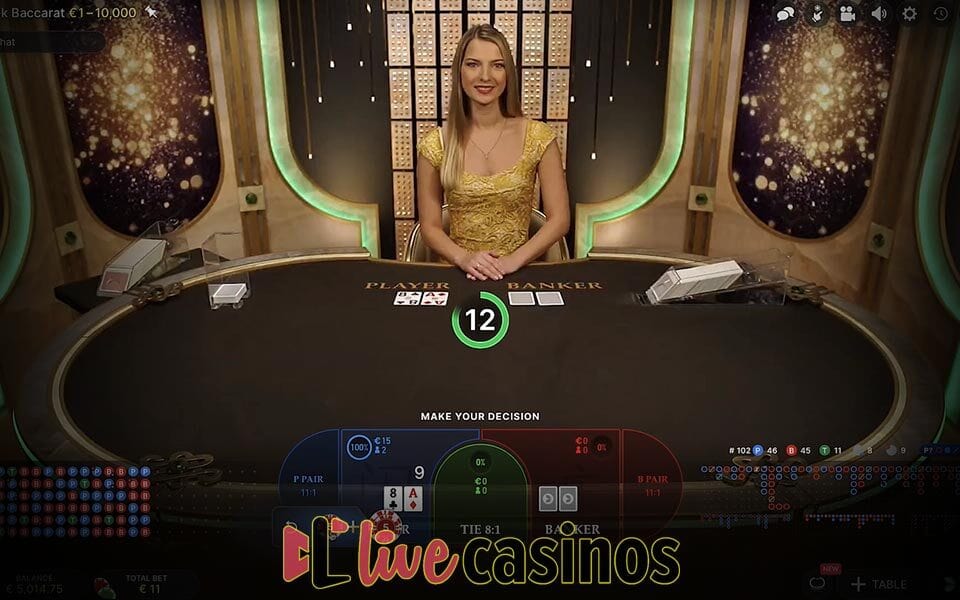 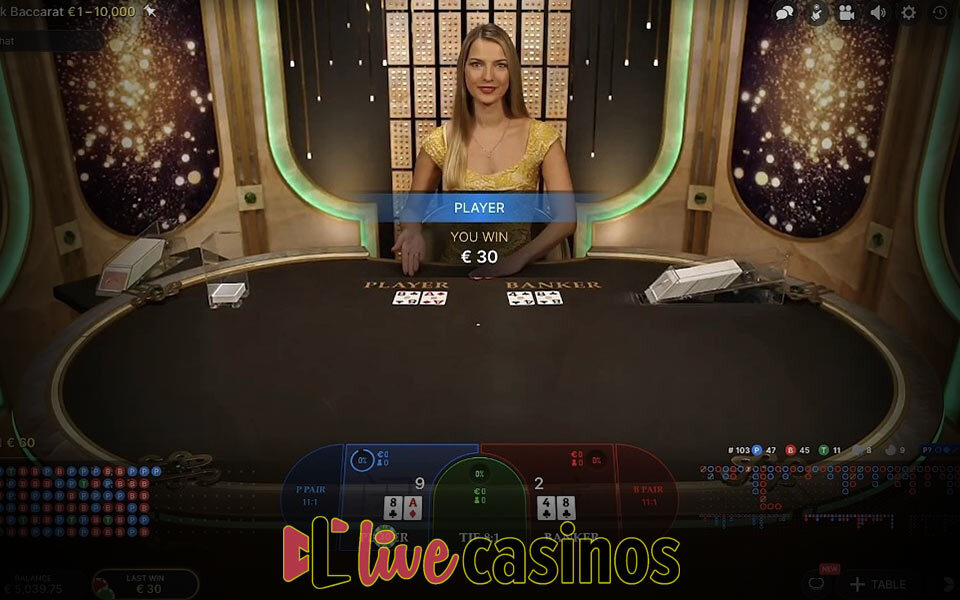 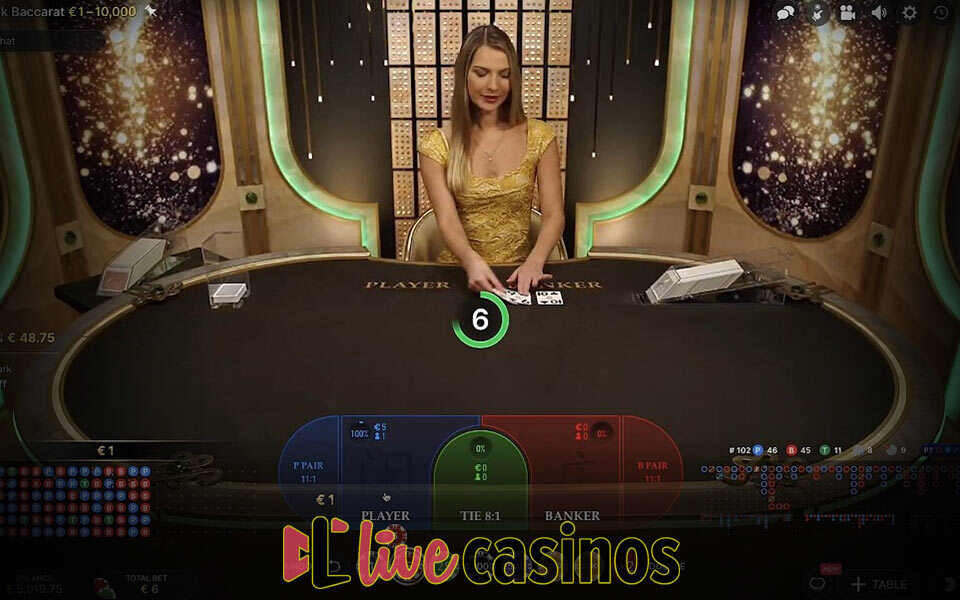 In essence, Peek Baccarat allows players to change their bets after seeing some cards revealed. It’s an interesting idea that is bound to add an extra layer of strategy to the beloved game. While innovative, Evolution is certainly not the first software provider to attempt to make punto banco a bit more interactive. The Peek Baccarat concept has existed at brick-and-mortar casinos for some time now. Moreover, Betgames share some similar ideas in their Bet on Baccarat game. Still, Peek Baccarat by Evolution is currently quite unique on the market.

The new baccarat game comes with all the perks of being Evolution-made. This includes a tried-and-true UI that most feel will feel at home with and widespread availability across many casinos. The video feed is streamed in full HD with casino studios staffed by trained professionals. That said, the recent string of live dealer baccarat games from Evolution primarily targets Asian audiences. The same is true for the Peek Baccarat live casino game, on top of the fact that it will mostly attract hard-boiled fans of punto banco.

Standard even money payouts with 8:1 returns on Tie wagers

Expanded betting options with Player and Banker Pair side bets

98.80% RTP for Banker bets, which are simultaneously the optimal way to play Peek Baccarat

A range of stats, roadmaps, and bet counters that keep track of how players are betting

How to Play Peek Baccarat Live

While Evolution Peek Baccarat introduces some interesting features, the core rules of baccarat are largely unaffected. The goal of the game is still the same, as are the payouts. Simply use the chips to select your stake and then click on one of the available bets to make them. The Peek mechanic doesn’t kick in until later down the line.

As always, the goal of Peek Baccarat is to correctly predict which of two card piles will collect a card total closer to 9. After a 14-second betting period, the two card hands – Player and Banker – receive 2 cards each. There are also special rules for a third card to be drawn under some circumstances. The two hands are then compared, and the one closer to 9 wins. If you correctly guessed the winning hand, you win.

As far as the other basics go, all you need to remember is that every card counts as its face value. The only exception are cards over 10, which all count as a 10. However, only the last digit in a hand’s total card score counts towards winning the game. For instance, hand totaling 13 counts as a 3.

The big twist comes after the betting period is over and the dealer starts revealing the cards. Refer to the Special Features section of this Evolution Peek Baccarat review for more info.

The Peek Baccarat paytable doesn’t hold many surprises to seasoned baccarat players. The main bets offer even money returns with an industry-standard 8:1 for Tie wagers. The Banker bet has slightly higher chances of winning thanks to the third card rules, so all Banker bets pay a 5% commission on all winnings.

Additionally, you need to pay a 20% fee if you want to take advantage of Peek mechanics.

According to Evolution, Peek Baccarat Live RTP is 98.80%. It’s safe to assume that number refers strictly to Banker bets. However, it also seems the 20% fee balances the Peek option quite well.

However, Tie and Pair bets don’t have the same luxury. Both offer much steeper house edge rates and are not recommended for beginners.

Remember that LiveCasinos.com isn’t here just for live casino game reviews. We also handle guides and strategies, helping you get the best start possible. For instance, we’ve covered various online live baccarat guides. Start with this Live Baccarat strategy guide, and then check out our Live Baccarat tips and tricks.

Make sure to choose the game that suits your taste and budget. For more extensive guides on live baccarat basics, read this article.

Still wondering how Peek Baccarat works in practice? The special feature is quite simple but adds an extra layer of strategy and player interactivity.

The gist is that the dealer will not reveal all the cards at the same time. Instead, they will start by turning over between 1 and 4 cards. They typically start with the two Player cards, which also tells them if they need additional cards. After the cards are revealed, players who paid the 20% fee get to modify their bets.

At this point, you can choose to double or triple your stake or fold. Doubling is quite self-explanatory, and you may want to consider doing it if the round seems to be going your way. Otherwise, you paid the 20% fee for nothing.

On the other hand, folding will return your full stake back to you. However, the 20% fee you paid to peek is not returned. As such, folding is a good way to minimize losses, but don’t overuse it or you’ll lose money in the long run.

Peek Baccarat strategy is thus much more complex than standard baccarat systems. You’ll need to understand which hands are strong, and a little bit of card counting can go a long way.

The two Pair side betting options are the usual fare. If you make a Player Pair bet, for example, you’ll win if the Player’s first two cards make a pair.

Our Verdict of Peek Baccarat Live

Evolution’s Peek Baccarat Live is a sort of experiment, and we more than welcome it. Moving forward, it can become either a staple of the industry or a niche product for strategically-minded baccarat players. Either way, we’re quite happy with the finished product.

First of all, we love to see any sort of innovation among live table casino games. We now have more variety in how to play baccarat than ever before, which is always a good thing.

Secondly, more player interaction is currently a huge trend in live casino gaming.  The Peek mechanic in Baccarat allows you to approach the game from a new angle, opening up new systems and strategies. This is definitely a game to look out for in 2022, and a must-play for baccarat fans.

What is Peek Baccarat?

Peek Baccarat is a type of baccarat game that allows players to alter their bets after some of the cards have been revealed. Players can choose to double, triple, or fold their bet after seeing 1-4 cards if they opt to pay a 20% fee.

Are there any side bets in Peek Baccarat by Evolution?

Yes. The game comes equipped with two side bets – the Banker Pair and the Player Pair. Both win if the hand you select gets two cards of the same value as their first two cards. This side bet is fairly standard for live casino baccarat and isn't affected by the peeking rules and mechanics.

What is the House Edge in Baccarat?

The house edge in Peek Baccarat from Evolution sits at 1.20% for Banker bets. This is only slightly higher than the usual rate for punto banco games with a 5% commission on Banker bets. However, the side bets and Tie wagers both have a noticeably higher house edge and are best avoided by beginners.

How do I win Peek Baccarat?

The game is decided the same as any other baccarat table. The hand that is closer to 9 wins, as do any bets made backing that hand. The extra options added with this variant do not directly affect the outcome, they merely offer more information while betting.

T&C apply. The minimum deposit required to get the bonus is €10. The wagering requirement is 30x the bonus amount. Expiry 90 days. New players only. 18+.