Restricted: Royal Panda is restricted in your country, please try these instead 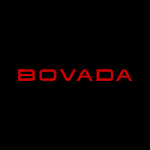 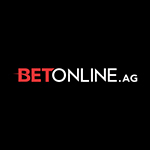 Players not accepted from

Highlights for Royal Panda
Best For

Sign up with Royal Panda casino, log in, make a deposit and wager 35x the offer until the Wager Bar is full. Claim your bonus from the ‘My Offers’ page. Full terms and conditions available at Royal Panda casino website. 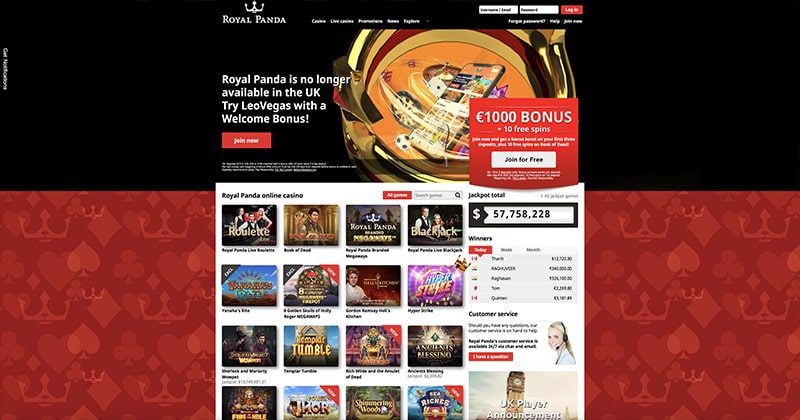 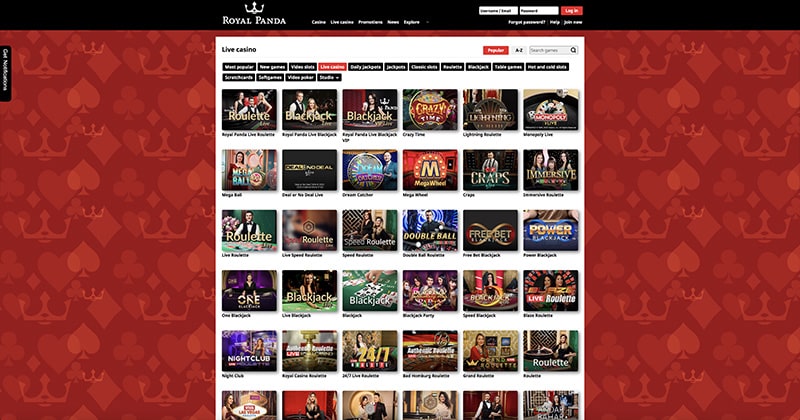 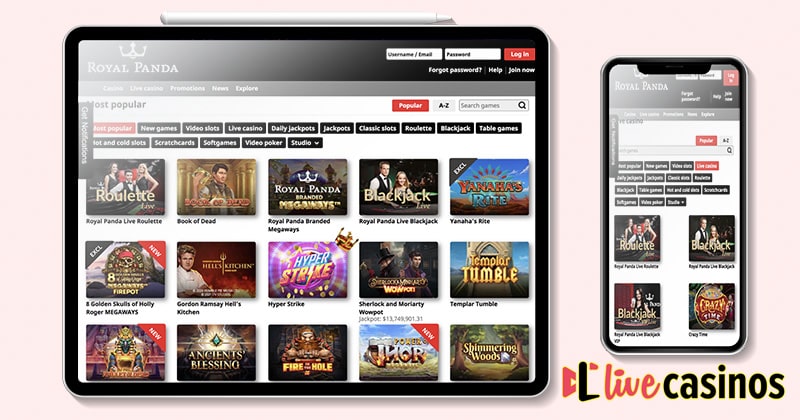 Royal Panda has been operational since 2014. The site quickly obtained a Maltese license to provide gambling services to a wide global audience and the brand set up its headquarters in Malta. Initially founded by Dutch entrepreneurs, the casino was sold to the legendary Swedish iGaming company, LeoVegas AB in 2017. Since then, the reputation of Royal Panda live casino is rock-solid thanks to a plethora of good moves. However, our goal was to look beyond the hype and see if this site is really what it boasts to be. To find this out, and much more, read the rest of our Royal Panda live casino review. You won’t regret it – there’s a lot to unravel!

Other sites – take note. This is how you welcome new players. Deposit any amount up to $1,000 and get a 100% match. Simple as that. Also, any deposit made automatically gets a 5% top-up. A lot of our readers have asked us about whether there’s a Royal Panda no deposit bonus or not. We were sad to see there isn’t one, but we believe the deals on offer are much better anyway.

Permanent deposit bonus for all players

Get a 5% Top Up for Every Deposit

This Royal Panda Casino welcome bonus is both simple and effective. It’s also one of the most lucrative deals we’ve seen, as new players rarely get a match that’s larger than the usual $100-200. At first, it felt like a scam, just because we aren’t used to seeing large amounts. The wagering requirements are also fair, coming in at a reasonable 35x. You have 7 days to use the bonus up. All things considered, this Royal Panda live casino bonus is an offer you can’t refuse.

Get a 5% Top Up for Every Deposit

Now, this is a promotion we rarely see. It brings value over time, as high rollers definitely know how valuable even the smallest boost can be. And when you also consider the fact that playthrough requirements are just 3x, it’s something that will definitely boost your live casino gaming sessions in the future. The Live Casinos team tested this promo extensively, and we can confirm it’s not a gimmick. 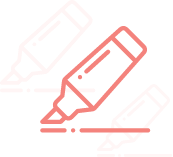 Our team is enamored with the Royal Panda live casino bonus section. These deals will definitely make a difference and we definitely recommend them as valuable tools.

This is what we call ‘doing things the right way.’ Royal Panda Casino is far from a newcomer, but they’re conducting their business at a level that far exceeds their actual experience.

The live casino games section is mostly handled by Evolution, with several tables by Authentic Gaming and Pragmatic Play also being available. Diversity is something we love to see. All three providers have some excellent games in their catalog, and it’s not every day that we see them all in one place. Thus, it’s safe to conclude that Royal Panda live casino has the full package for players of varying preferences.

Okay, we’ve determined that Royal Panda casino games are suitable for just about everyone, but now what? Well, it’s time we took a detailed look at how each iconic table game is represented. Some have more variants than others, but there’s no shortage of choices to be made, that’s for sure. Let’s take a deeper dive into Royal Panda’s portfolio and highlight every individual table, shall we?

Good ol’ 21 will never go out of fashion! It seems like Royal Panda is well aware of this, as they’ve flooded their live dealer section with various iterations. There are even some bespoke tables, just to spice up the already spicy collection.

Again, Royal Panda live casino features a plethora of roulette tables, coming from several different providers. It’s a who’s who of the best variants seen in recent years, so you’ll definitely have copious amounts of fun playing them.

Compared to the previous two games, baccarat isn’t as nearly as ubiquitous. Still, that doesn’t mean Royal Panda live casino isn’t on top of things. There are several exciting variants of this popular card game, so it’s only a matter of time until you find something that suits you.

Aside from these three casino staples, Royal Panda Casino has a lot more to offer. Whether it’s less popular games or experimental ones, there’s a lot to try out at this site’s lobby. Adding game shows by Evo and Pragmatic Play was a great decision.

With so many great games to choose from, it makes perfect sense that some of them are for VIP players only. Royal Panda knows its audience quite well. They didn’t overdo it with a thousand unnecessary VIP tables, which is a wise decision. Most of these tables let you bet up to $30,000 while still maintaining a level of flexibility when it comes to the lower end of the spectrum. Overall, the betting limits vary from game to game, but most tables will allow you to wager anything from $0.1 and above. Royal Panda live casino is, without a doubt, a nice place for all bankroll sizes.

Just like when you’re building a house and you need a foundation, you just need Evolution if you’re going to build a live casino. They are just that good. From unparalleled camerawork to UIs looking like they’re from the future, this provider has it all. So, we love the fact that most of Royal Panda’s portfolio comes from this company. Also, they didn’t go bonkers and buy just about every Evo game. Instead, they’ve acquired just what their players need.

Pragmatic Play and Authentic Gaming make their contributions felt, as well. Overall, it’s a nice mix of different influences. Authentic Gaming really outdid themselves with Blaze Live Roulette and Nightclub Live Roulette, so their titles really belong in this exclusive group. Pragmatic Play’s game shows and best variants are present, too. There’s definitely a sense of order in the Royal Panda live casino lobby and we love how easy it is to use.

When it comes to banking, Royal Panda Casino will make you feel safe and cozy. Through our own experiences, we’ve determined that they have what it takes to process any amount in a decent time period. While they might hand-approve your withdrawal requests instant, in most cases, you can request to claim your winnings and have your request signed off in less than 24 hours. One thing we aren’t quite enamored with is the lack of cryptocurrencies. Players are prioritizing speed and anonymity now more than ever, so adding Bitcoin or Dogecoin deposits as an option would be great. Regardless, it’s a nice group of banking platforms.

One thing we didn’t quite understand was Royal Panda’s stance on maximum withdrawals. Usually, sites state the threshold below which players can operate, but this site hasn’t included such information so far. However, don’t view this as a red flag or anything. We were able to withdraw our money in various amounts, so we can at least attest to the fact that high rollers can feel welcome here. In addition to our own testing, we looked around for complaints and reviewed them. There haven’t been any accusations, unresolved issues, or anything of the sort. Your money is safe with Royal Panda Casino, all things considered.

Being able to play on multiple platforms has never been more important. If you love gaming on the go, then Royal Panda live casino is the site for you. They only offer games built using the HTML5 infrastructure, so they’re all ready-made for mobile play. iOS and Android devices will run every table without any issues, as long as your OS version isn’t too old. Even if you have a Windows phone, you’ll find that this platform can also be suitable for playing live dealer games. For those of you that own tables, Android, or Apple, you’ll find that the experience is even better. Royal Panda mobile is our top choice for smartphone gaming.

Royal Panda is compatible with the following mobile devices:

If you don’t want to see English everywhere, all time, you can change the casino’s interface to Chinese, Finnish, German, Chinese, Japanese, Portuguese, or Spanish. This is completely in line with Royal Panda’s international image, as they’ve always stated that their intentions involve becoming a global brand. As for live dealer games, though, you won’t find any native tables. We would love to see this change, especially because Royal Panda has such a major opportunity to capitalize on its cross-continent presence.

As for customer support, they are also fluent only in English. Obviously, this isn’t a flaw, as casinos generally resort to this language unless they are locally oriented. The agents are adept at recognizing problems and resolving them in a manner that isn’t just efficient, but also pleasant. You can contact them through a variety of different means, which is something LiveCasinos.com looks for in today’s online casinos. Still, it’s a bummer to see there aren’t any native language options. To be frank, this is probably Royal Panda’s biggest weakness. Given the problems many sites face nowadays, having such a small issue being your most glaring downside is definitely a blessing.

Can I play games for free at Royal Panda live casino?

Unfortunately, no. This site currently doesn’t offer a free-to-play option for any of its live dealer tables. You can claim a bonus and have fun with the bonus cash, though.

Yes, Royal Panda Casino has a license from the Malta Gaming Authority (MGA). They previously held a UK license as well, but have abandoned it to pursue other markets such as Brazil, India, and the EU.

Yes. They have a certificate from COMODO and always use SSL encryption to shield transaction information and customer data.

What options do I have for setting betting limits?

To curb your spending, you can take a test with LeoSafePlay. This software assesses your risk of overspending and directs you to useful resources. You can also set limits on both the time you spend gambling, as well as deposits and withdrawals.

Yes, new players have access to a bonus that matches your first deposit. There are also other deals available, so follow the Promotions page closely.

What are the wagering requirements for bonuses at Royal Panda Casino?

The welcome bonus has to be wagered 35x, while the top-up for every deposit has a playthrough requirement of 3x.

Yes! Royal Panda gladly accepts Indian players. They have a few India-specific promotions, aside from the fact that they accept INR as a currency.

What other games does Royal Panda offer?

You can play slots and table games, as well as bet on sports. Royal Panda offers the full gaming package.

Yes, you can. In addition to phone and email, agents are also manning the live chat platform in case you need something.